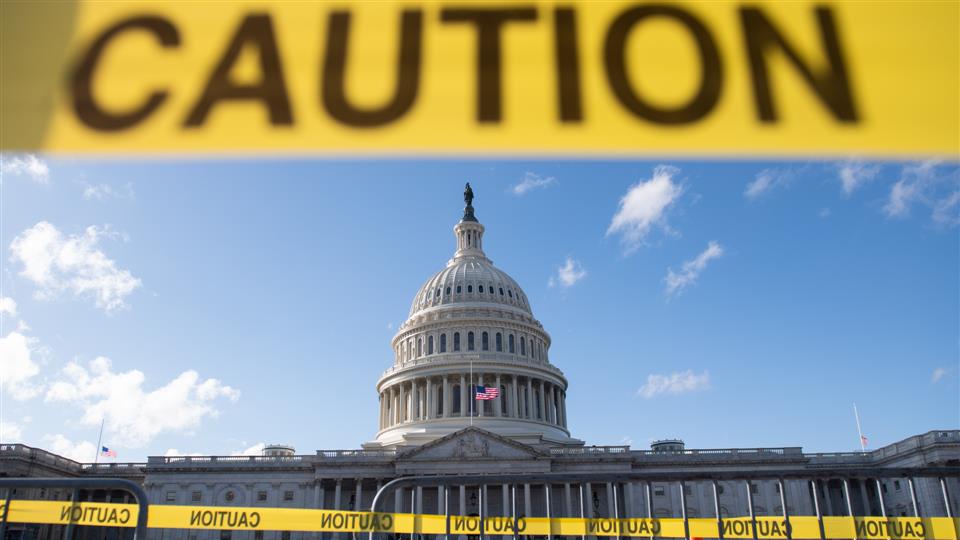 In all the excitement surrounding the Evergrande crisis which hit risk assets like a ton of bricks today, market watchers may have forgotten that not only is the Fed scheduled to make a regular appearance on Wednesday but that the debate over the fiscal stimulus and the debt ceiling are still ongoing.

So, as Goldman’s Alec Philips summarizes the latest newsflow out of the Beltway, there are two main risks out of Washington at the moment:

First, the debt limit (late October deadline) and funding the government to avoid a shutdown Oct. 1 appear no closer to resolved. The House Rules Committee was due to move forward today on legislation addressing both issues, but it is still not clear whether the stopgap spending measure Democrats instead put forward to keep the government open past Sep. 30 will include a debt limit suspension.

If it does, there is a real risk of a shutdown at the end of the month, since Republicans look likely to oppose it in the Senate. If the issues remain separate, a shutdown becomes unlikely but the risk around the debt limit increases somewhat. That decision, which should have come today, now looks likely tomorrow, though further delay is clear possible.

The other risk relates to the fiscal package the House has been working on. Axios reports that Sen. Manchin (D-W. Va.) told a group that he supported a “pause” on the broad fiscal package until 2022. While not completely surprising — he already said he supported a pause, but did not specify for how long — this suggests more risk to the fiscal package than his prior comments had. Separately, Sen. Sinema (D-Ariz.) is reported to have indicated that she would not vote for the broad fiscal package if the House does not pass the separate infrastructure bill when it is expected to come up for a vote on Sep. 27.

This comes as Democratic leaders have raised the prospect of delaying the vote on the infrastructure package, which was scheduled for Sep. 27 as part of an agreement with Democratic centrists in the House, in return for their support for the Democratic budget resolution that passed in August. On December 6th and January 6th , President Trump’s Words Shook the World. . .

In short, a mess, but as the Goldman strategist notes, while these appear to be important developments that could shape the outcome of the fiscal legislation Phillips still expects both fiscal packages to become law despite potential setbacks:

It seems unlikely that any of these lawmakers will want to take responsibility for blocking their own party’s entire domestic policy agenda. Indeed, some of the centrists who have raised issues with the legislation are often in the most competitive congressional districts and are likely to want to be able to show an accomplishment between now and the midterm election. More generally, we would expect that even if the legislative process on both packages stalls, Democratic leaders would likely find a way to salvage many of the important pieces before year-end, when items like the expanded child tax credit expires.

That said, recent developments are another reason to believe that the size of the package will be scaled back (as discussed last week, Goldman expects the $3.5 trillion to be reduced to $2.5 trillion, and the risks lean toward an even smaller package, just as the US economy is rapidly slowing down) and that the tax hikes proposed to pay for it are scaled back as well (the bank expects $1.5 trillion in tax hikes, also with risks leaning toward a smaller figure).