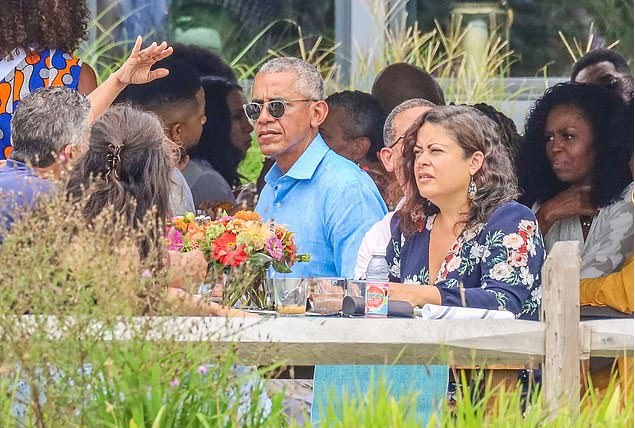 For over one year, Democrats have pushed to shut down places of worship, schools, spas, beauty and nail salons, gyms, airlines, hotels, cruise lines, parks, restaurants, schools, weddings, funerals, birthdays, and family reunions over the fear of spreading the CCP virus. Behind the scenes, however, Democrats like House Speaker Nancy Pelosi were caught getting their hair done without a mask, MI Governor Gretchen Whitmer was caught flying to Florida to visit her dad and dining maskless with a large group of people, CA Governor Newsom was also caught dining out with a large group while locking down residents of his state.

So, it really didn’t come as much of a surprise when Barack Obama (the acting president), decided to throw himself a huge birthday bash in the middle of the Wuhan virus pandemic.

As usual, the dishonest mainstream media looked the other way. Reports that 63 people have now tested positive for COVID on Martha’s Vineyard since the Obama birthday bash are difficult, however, to ignore.

According to the Daily Mail, the 63 COVID positive cases are more than any week since April.

However, health officials note it’s still too early to know whether the hundreds of guests and workers gathered for his weekend of maskless parties have contributed to the surge in cases.

‘At this time we’re not aware of any cases connected to the Obama party,’ Tisbury health agent and boards of health spokesperson Maura Valley told DailyMail.com. ‘It’s a little too early and the only way we’re going to know is through comprehensive contact tracing.’

In defiance of mounting new Covid restrictions, and in another bold display of “do as I say, not as I do”, Barack Obama and his lovely wife Michelle partied with hundreds of “close friends” in their $12 million mansion on the exclusive Martha’s Vineyard. Barack’s party was brimming with elitist politicians and celebrities who came to celebrate his 60th birthday.

Proving Democrats believe rules are only for the little people, the Obamas originally planned for as many as 700 people, roughly 500 guests, and 200 staff, but reportedly scaled back the birthday bash  due to the changing situation with rising Covid cases.

The fact that the party was planned at a time when Americans are coming under renewed draconian Covid measures, illustrates their own true lack of concern or even belief in the alleged “deadly” variant they’re attempting to enslave us all with.

The royal couple with a handful of friends in the background:

John Kerry cares so much about the environment that he took a private jet to Obama’s birthday superspreader.

Obama followed up his party with a brunch Sunday at Beach Road restaurant, dining under a specially-erected marquee beside the water in Vineyard Haven.