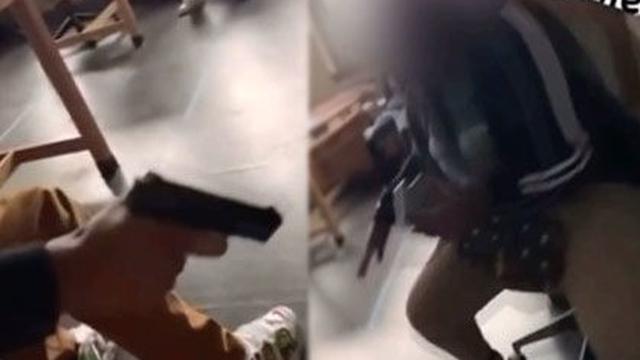 On the same day an 18-year-old murdered 19 children and two teachers in Texas, a Detroit high school began an investigation after a student appeared to pull a gun out in class. Video surfaced on Tuesday that appeared to show a Marygrove high school student pulling either a handgun or a BB gun at school and pointing it at another person, possibly a student. The other person in the video gets up and walks away.

An investigation was launched by the school and FOX 2 obtained a statement from the school that was sent out to parents that said they are aware of what happened and are working to identify the student. Principal Lisa Williams sent out the letter note below to students and parents: “Please be advised that a Marygrove parent shared a video that appears to be a Marygrove student with a gun or BB gun at school. We are working with authorities to determine the identity of the student. At this point, we have no information that there was intent to use the gun at school. “Police officers will be present at Marygrove tomorrow to ensure the safety of students and staff.” “We urge all families to check students and backpacks before school each day & discuss the consequences of bringing a weapon, or facsimile of a firearm, to school.” A Detroit Public Schools Community District spokesperson released this statement, confirming they were aware of the video and incident and confirmed additional officers were at the school to ensure the safety of the children inside.

“We received this video from a Marygrove parent after school yesterday. It is allegedly a student at the school & in the school. It is unclear whether the gun is real or a BB gun. Police were made aware of the video and are actively investigating the video to determine the identity of the alleged student and possible gun. We shared this information with staff, families and students yesterday evening. We also placed officers at the school today & increased random searches of bags.