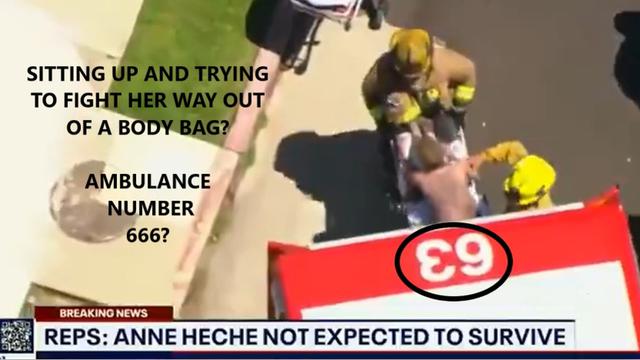 From a body bag to the ICU at the hospital? She does not look burned to me. Why did the firefighter act the way he did? Slamming her back on to the stretcher? Ambulance number 63? Who was she sacrificed for or why?

What a psyop. Did the CIA hack and remote control her car? Is this a warning to others? Did she piss off the manbitch Ellen Degenerate? Did they want to just shut her up? They don’t put live people in body bags. Well at least they are not supposed to do that, they skipped a few steps it would seem. She was in a burning car and house for how long? She would look like burned hot dog and charred I would think?

While reporting the story and she is tearing open the body bag to escape the caption reads “Heche not expected to survive”. The next sentence should have been “we will finish her off at the hospital”. Do I know exactly what this was? No. I do know something is wrong with this picture.