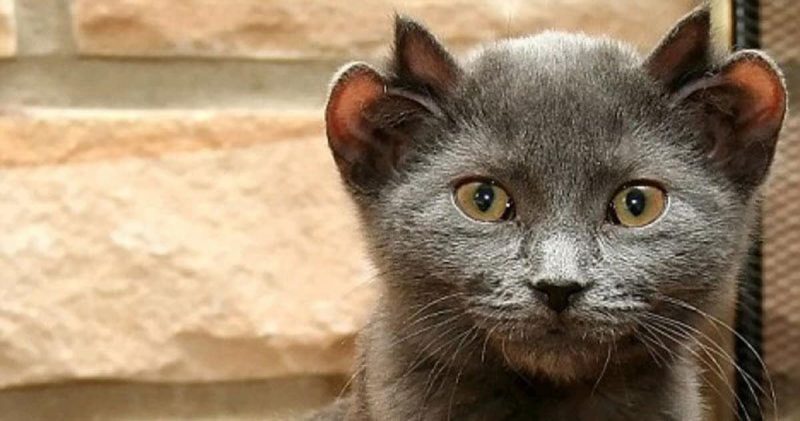 Yoda is a cat that was born with a rare birth defect, two extra ears, and he is incredibly charming!People love cats, and I don’t believe I should list any of the hundreds of reasons why they do. These incredibly cute, gorgeous, quirky, and irresistible animals can brighten up everyone’s day!Felines are extremely cool pets, and their owners love to share tons of their pics and videos and show the rest of the world how much they love them.I bet you have seen so many cats in your life, but the one we introduce to you today is something really special! Meet Yoda, the feline that looks and acts like no other cat you’ve seen so far!

Yoda has been born with a rare birth defect, four ears. Yet, this does not seem to affect him in any way, apart from making him an Internet celebrity!

The rare cat with two extra ears was adopted by Valerie and Ted Rock back in 2006, and as they are probably Star Wars fans, they named him Yoda.

Well, he does look like a fictional character, doesn’t he?

Some people claim that George Lucas had a cat named Yoda, and this is where he found the inspiration for the name of the famous movie character.

The story of the unique feline has recently resurfaced after first garnering online attention more than a decade ago, and people are still falling in love with him at first sight!

“We were at a pub on the south side of Chicago with a group of friends when we noticed a small cage sitting on the bar and people passing around a kitten. He had been part of a large litter and the owners were looking to find a home for him.

Ted and I had just lost a cat that was our pet for over 20 years, and we were sure we were done with cats.”

However, this was not the case:

“When he was passed around he reached for Ted, crawled up into the crook of his neck, and fell asleep – Ted was a goner. It was a done deal when the kitten made himself at home on Ted’s shoulder.”

The rest is history! Yoda is one lucky cat, and the family was more than happy to welcome him!

After his adoption, Yoda’s parents took him to the vet, to check if his condition affects his life. It was only then that they realized that their new pet is actually very special:

“We have spoken with other vets in our acquaintance, and they likewise had never encountered anything like this.

We began to realize that we had something very special.

As a result, he has been an indoor cat and has a chip installed in case he gets lost. Yoda is so different that we were concerned that he might be catnapped.”

They were told that the extra pair of ears does not affect his hearing, as they are not attached to the base of the skull, with one placed slightly behind the other.

Yoda’s parents explained that he is as a perfectly normal cat; affectionate, sociable, and curious, but has an “interesting obsession with bread”!

Yoda is one incredibly cute and charming cat!