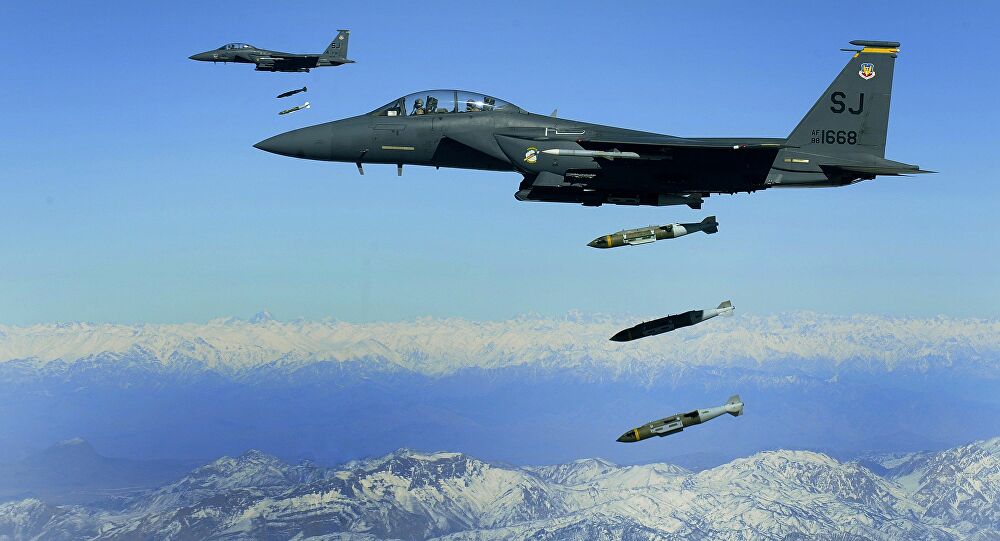 Amid the imminent US and NATO withdrawal from Afghanistan after over 19 years of occupation, the Taliban has launched offensives in virtually every region of the country, seizing multiple border checkpoints and sparking fears that the Kabul government may collapse shortly after NATO’s exit.

The United States has been increasing its air strike missions in Afghanistan, and will continue to do so if the Taliban continues its offensive operations, US Central Command (USCENTCOM) Chief Gen. Kenneth McKenzie has announced.

“The United States has increased air strikes in the support of Afghan forces over the last several days, and we are prepared to continue this heightened level of support in the coming weeks if the Taliban continues their attacks,” McKenzie told reporters in Kabul on Sunday.

The commander did not clarify whether US strikes would continue after 31 August, by which point all US and NATO troops are expected to be withdrawn.

Emphasising that a Taliban victory in the Afghan civil war was not “inevitable,” McKenzie admitted that Kabul government would face “hard days ahead” in its fight against the Islamist militia. “The Taliban are attempting to create a sense of inevitability about their campaign. They are wrong,” the general stressed.

US air strikes against the Taliban appear to be a violation of the February 2020 Doha agreement, which committed US forces not to attack the Islamist militia if they were not themselves attacked by the group directly.

All of Afghanistan’s neighbours have beefed up security on their borders with the war-torn nation amid a dramatic deterioration of the security situation in the country as NATO continues its withdrawal.

On Friday, Secretary of State Antony Blinken warned that Afghanistan would become a “pariah state” if the Taliban successfully seized power throughout the country, and suggested that Kabul would not receive support to rebuild from the international community if this took place.

The Taliban has claimed to have seized up to 85 percent of Afghanistan’s territory and up to 90 percent of the country’s borders. The Kabul government has dismissed these claims as “baseless propaganda,” but admitted that the security situation is difficult. The government says its troops maintain control of all “main cities and highways” in the country.

On Thursday, a Russian Foreign Ministry official told Sputnik that the Taliban had seized almost all of Afghanistan’s border with Tajikistan, and that the country’s northern provinces are swiftly becoming a new hotspot and a direct threat to Central Asia’s security.

President Biden has continued to defend the withdrawal, which was begun in May, saying the Afghan army had “300,000 well-equipped troops,” and the advantage of an air force, “against something like 75,000 Taliban,” and stressing that a Taliban victory was “not inevitable.”

Joint Chiefs of Staff chairman Mark Milley said on Wednesday that about half of Afghanistan’s district centres were under Taliban control, but noted that the group has not taken control any of the country’s 34 provincial capitals.

Also Wednesday, Afghan President Ashraf Ghani blasted the Taliban for what he said was their reluctance to hammer out a peace deal with Kabul to stop the current escalation of violence.

The US and NATO have spent over $2 trillion and 19+ years in Afghanistan, with the war also claiming the lives of about 3,500 coalition troops, over 4,000 Western mercenaries, 100,000+ Afghan civilians and tens of thousands of Taliban fighters. The current phase of the war, which began in late 2001 over the Taliban’s protection of suspected 9/11 mastermind Osama bin Laden, is the latest page in a conflict which has lasted for over forty years. The war in Afghanistan began in the late 1970s, after the CIA, Pakistani, Saudi, Egyptian and Chinese intelligence provided cash and weapons aid to an assortment of jihadist militants fighting the Afghan government that came to power in April 1978 and began receiving direct military support from Moscow starting in late 1979.