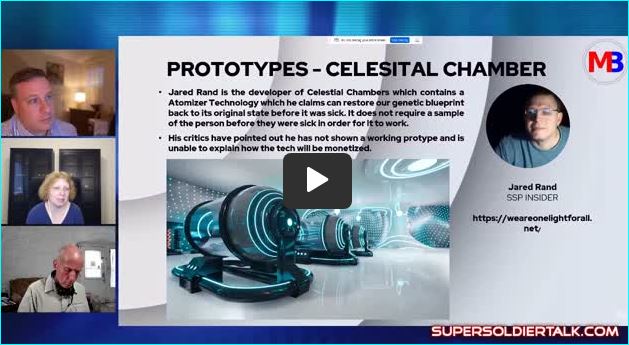 In this power point round table video discussion, we will be sharing the latest about med bed roll outs and covert medical technology of the SSP featuring SSP Super Soldier James Rink, Ileana the Star Traveler, and Dr. Johnny Delirious.
Dr. Johnny Delirious Ph.D. is a bestselling author, Radio Host, and has spent 38 years of experience as a Naturopathic doctor pioneering the Hair Tissue Mineral Analysis (HTMA) Test

He began his journey after he was diagnosed with life threatening Hepatitis c and 96% scar tissue cirrhosis of the liver. He was informed he would need a new liver transplant and only given 6 months to live. During this time, he was abducted a group of Grey Et’s known as the, Resource Archive, who taught him a new set of healing protocols that have helped many other professionals including doctors, dentists, lawyers who don’t want chemical drugs or surgery recover from the same conditions that everyone said were hopeless and fatal.

Ever since then he has been known as Dr. Delirious and continues to be free of Hepatitis C and has no scar tissue. Dr. Johnny works with 5 world class laboratories and directly with the laboratory that is bringing out the same research on scalar waves for health that Nikola Tesla discovered and developed.

This lab has proven they will rejuvenate health and provides the Tesla MedBed and Tesla BioHealer. Dr. Johnny also works with the other types of med beds soon to be introduced in his clinic by the Quantum Team.