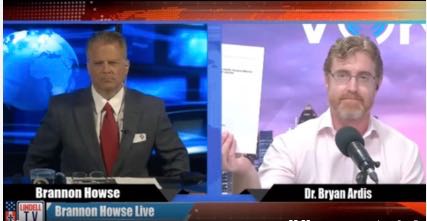 𝗗𝗿. 𝗕𝗿𝘆𝗮𝗻 𝗔𝗿𝗱𝗶𝘀 𝗷𝗼𝗶𝗻𝗲𝗱 𝗕𝗿𝗮𝗻𝗻𝗼𝗻 𝗛𝗼𝘄𝘀𝗲 𝗼𝗻 𝗟𝗶𝗻𝗱𝗲𝗹𝗹 𝗧𝗩 𝘁𝗼 𝗱𝗶𝘀𝗰𝘂𝘀𝘀 𝘁𝗵𝗲 𝗶𝗻𝗳𝗮𝗺𝗼𝘂𝘀 “𝗦𝗹𝗶𝗱𝗲 𝟭𝟲.” 𝗧𝗛𝗘 𝗙𝗗𝗔 𝗞𝗡𝗘𝗪. 𝗧𝗛𝗘𝗬 𝗝𝗨𝗦𝗧 𝗗𝗜𝗗𝗡𝗧 𝗧𝗘𝗟𝗟 𝗬𝗢𝗨!
𝙏𝙃𝙄𝙎 𝙄𝙎 𝘼 𝙈𝙐𝙎𝙏 𝙒𝘼𝙏𝘾𝙃 𝙄𝙉𝙏𝙀𝙍𝙑𝙄𝙀𝙒
Dr. Bryan Ardis has been studying the adverse effects of these vaccines worldwide and has been following all of the studies and VAERS data weekly. In October 22, 2020 Dr. Ardis found FDA documents that listed 4 different blood clot disorders that they expected would come from these Covid vaccines.
Dr. Ardis has copies of this report and the infamous “Slide 16″ that listed all expected serious adverse effects / side effects to people that the FDA predicted would be reported. In December, the FDA produced “Fact Sheets” for Pfizer and Moderna vaccines and NONE of the serious side effects from their own October report were listed. Zero.
Those facts sheets were given to hospitals, doctors, vaccine administrators, the media, and the public.. (Fact Sheets = Emergency Use Authorization Documents ) The “Fact Sheets” are supposed to be the one document that informs the public receiving the vaccine of any side effects or problems, so they can make an informed decision, and have true and informed consent. This clearly is not happening.
Dr. Ardis is the CEO of Ardis Labs and his 2 practices have helped thousands of patients from all over the world including from as far away as the Philippines, Taiwan, Australia, Barbados, Italy, Scotland & many more.
He was the first doctor in America to blow the whistle on Remdesivir – the Non-FDA Approved drug that Dr. Fauci made a protocol in all hospitals in the United States. China used Vitamin C and showed around 4K deaths since January of 2020. America followed Fauci with Remdesivir and Ventilators and we had, according to the CDC, over 500,000 deaths… though that number is highly suspicious.
In early 2020 Dr. Ardis lost his Father-In-Law because of ill-advised hospital protocols. Since that time Dr Ardis has been on a mission to help educate the public about the dangers to Americans in many of our “institutes of health.” He is a devout follower of Dr. Sherry Tenpenny and believes vaccines are making people sick and that Big Pharma is creating their future consumer base.
His podcast “The Dr Ardis Show” can be found on our Dr Ardis Show YouTube page and Vokal Media platform