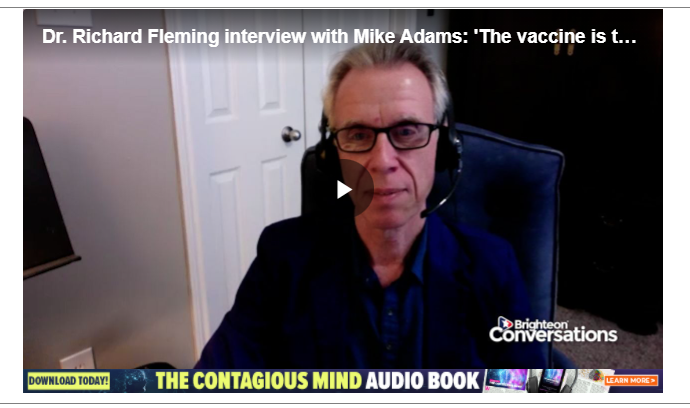 Dr. Richard Fleming warns the “vaccine is the bioweapon” in bombshell interview with Mike Adams

To truly understand why the Wuhan coronavirus (Covid-19) is still being reported as a problem almost two years after it was first announced, look no further than the “vaccines,” which Dr. Richard Fleming says are the true bioweapon.

Appearing in a recent Brighteon Conversation with Mike Adams, the Health Ranger – watch below – Fleming talked about his new book, Is COVID-19 a bioweapon? A scientific and forensic investigation, as well as the history of coronavirus biological weapons and how we got to this point.

The mass vaccination protocol being pushed by the likes of Tony Fauci is having a disastrous impact on public health, Fleming explained. This thing would have been long gone had the virus simply been allowed to run its course without Donald “father of the vaccine” Trump’s “Operation Warp Speed” injections, which are fueling the mutation and spread of new Chinese Virus “variants.”

“We were able to put pressure on the virus to promote one of the variants, in this case delta … that if you actually attack one part of, in this case, the virus, you’ll promote the spread of the other types that are immune because the antibodies are completely different for that type of spike protein.”

This pressure of which Fleming speaks is selective pressure induced by the injections. Much like how antibiotic drug use fuels the mutation and spread of oftentimes deadlier “superbugs,” Fauci Flu shots are doing the same thing to the Wuhan coronavirus (Covid-19).

“The virus is like antibody-resistant bacteria: those bacteria are already resistant, but if you dump antibiotics into the system indiscriminately, you’ll kill off the ones that can’t handle that, but the antibody-resistant ones will flourish,” is how Fleming put it.

“When they talk about the unvaccinated having problems as well, well of course, because it’s all been selected out to produce these slightly more infective delta variants.”

What this means is that Fauci and friends are created another new pandemic from the shots, which piggybacks on the last pandemic they created with the much-less problematic SARS-CoV-2 virus that came from the Wuhan Institute of Virology (WIV).

All of this was done with American taxpayer dollars, by the way, funneled by Fauci into a number of different channels both here and abroad. Fort Detrick in Maryland is said to have been involved, as was the University of North Carolina at Chapel Hill. And everyone involved, including Fauci, has violated the Biological Weapons Convention Treaty in the process.

Be sure to watch the full interview at Brighteon.com