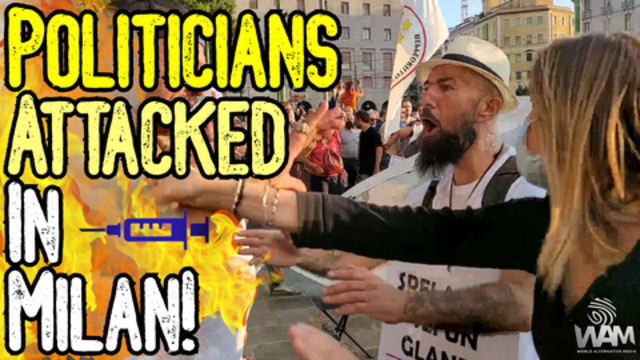 Josh Sigurdson reports on the ground at the anti-vaccine passport protest in Milan, Italy as tens of thousands of people take to the streets to demand an end to the so-called “green pass” which restricts individuals from taking part in daily life without an experimental jab.
During the protest which we will post the full report on later, a tent for the 5 star movement was spotted. The 5 star movement is a once center right political party that became center left. They went from being against vaccine passports to suddenly supporting vaccine passports. There are a lot of rumors among Italians that George Soros is funding the party.
In this video, you see politicians and paper pushers for the 5 star movement getting attacked by protesters. Not young protesters, but mothers, fathers and grandparents.

People who used to support them and now face tyranny at the hands of the party. People’s lives are being destroyed by the vaccine passports and they are standing up. This is a revolution and it starts in Italy, France and possibly even Australia.

The protest was peaceful, but there’s always room for people learning their lessons after attacking the very bodily autonomy of the individual.