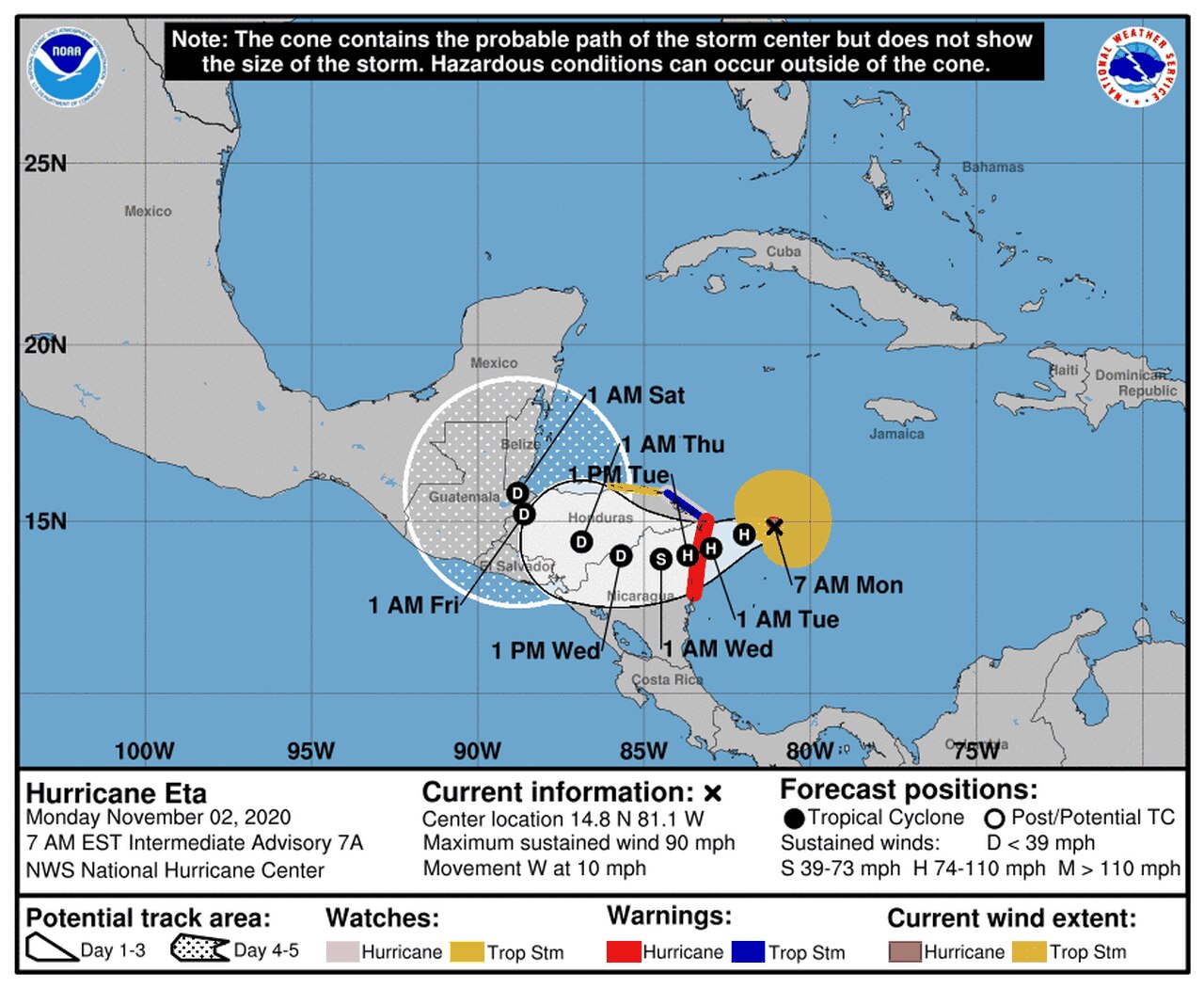 Eta became the Atlantic’s 12th hurricane of the year Monday morning and was rapidly intensifying as it headed toward Central America, where hurricane warnings continued.

Eta is a top-end Category 2 hurricane with 110 mph winds as of the latest update from the National Hurricane Center at 9 a.m. CST.

Forecasters said rapid intensification will be possible, and it’s not out of the question that Eta could be a Category 3 — or major hurricane — later today. Category 3 winds begin at 111 mph.

It is forecast to make landfall in Nicaragua by early Tuesday and move inland.

The hurricane center was pulling out its strongest language to describe what Eta could bring to Central America.

It could bring an incredible amount of rain, 15 to 25 inches, to parts of Central America, which could cause “catastrophic,” “life-threatening” flooding and mudslides, the hurricane center said.

In addition, a storm surge of 12 to 18 feet will also be possible in Nicaragua, forecasters said. That’s an increase from the 10-15 feet forecast earlier today.

As of 7 a.m. CST Monday, Hurricane Eta was located about 115 miles east of Cabo Gracias a Dios on the Nicaragua-Honduras border, and was moving west at 9 mph.

* A hurricane warning is in effect for the coast of Nicaragua from the Honduras-Nicaragua border to Sandy Bay Sirpi.

* A tropical storm warning is in effect for the northeastern coast of Honduras from Punta Patuca to the Honduras-Nicaragua border.

* A hurricane watch is in effect for the northeastern coast of Honduras from Punta Patuca to the Honduras-Nicaragua border.

* A tropical storm watch is in effect for the northern coast of Honduras from west of Punta Patuca westward to Punta Castilla.

Those on the hurricane weary-Gulf Coast were watching Eta closely, but forecasters said it was questionable if an intact Eta makes it back over water and reorganizes after spending time over the mountains of Central America.

But … the hurricane center said some forecast models are showing a storm over the northwestern Caribbean later this week.

“Although Eta’s low-level center may not survive after being inland over Central America for so long, most of the global models depict a cyclone over the northwestern Caribbean Sea later this week and into the weekend which appears to develop from at least a part of Eta’s remnants, and the new NHC track forecast shows the system emerging over the northwest Caribbean Sea after 96 (hours),” forecasters said in their 9 a.m. discussion. “However, the uncertainty in the long-range portion of the forecast remains quite high.”

The next name on the list is Theta, by the way. Hurricane forecasters used up the 2020 list of names in September and have had to use the Greek alphabet ever since. So far there have been Alpha, Beta, Gamma, Delta, Epsilon, Zeta and Eta.

The last four of those have been hurricanes, for a total of 12 this season, so far.

According to Colorado State University hurricane researcher Dr. Philip Klotzbach, only the other Atlantic hurricane seasons on record have had 12 (or more) hurricanes: 1969, 2005 and 2010.