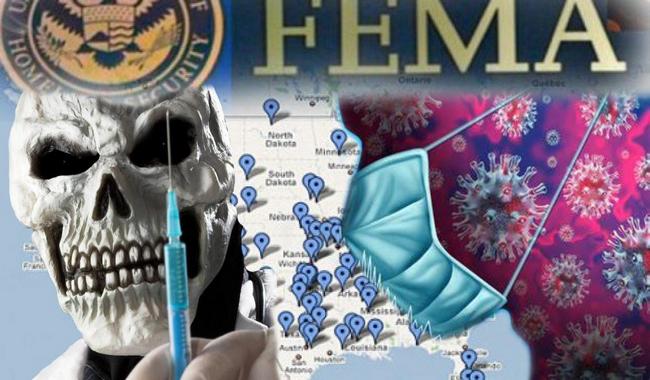 A Texas woman dropped a bombshell this week when she took to social media to recount an encounter she had at a local Texas hospital. While nurses and doctors are being mandated to take an experimental COVID shot or lose their jobs, all in violation of the Nuremberg Code, federal and state laws, the unconstitutional Federal Emergency Management Agency (FEMA) is busing in their own “unvaccinated” nurses and doctors to replace them.

Andie Collard is a swim coach of over 25 years in McKinney, Texas who had the encounter and spoke about it on her Facebook page.

Collard claims to have gone to Medical City in Texas to visit a friend. While there, she and her friends noticed a large charter bus outside the hospital. So, they approached a woman who was standing outside the charter bus to see what was going on.

The woman they spoke to was wearing scrubs and had a mask on and claimed to be a nurse. The woman then said she was from Wisconsin and the several nurses had been bused in to replace the nurses who would not take the experimental COVID shot.

At this point, the woman was asked why she and others were bused in to which she responded that doctors and nurses were leaving.

When asked why they were bused in when there were plenty of doctors and nurses available in the area, the woman declared it was because of the “COVID search.”

Mrs. Collard recounted last year they claimed the hospital was full of COVID patients but the reality was that there were only about 15% of the beds assigned for the alleged COVID patients.

She then asked if most people, which is questionable, are “vaccinated,” then why is there a “COVID search”?

The response from the woman, after stepping back a bit, was “I can’t say.”

While the woman would not acknowledge why doctors and nurses were leaving, she did acknowledge that all employees of the hospital were mandated to get the shots or lose their jobs.

However, when the woman was asked what hospital she was from, she said that she was not from a hospital but from FEMA and so were all the other nurses on the bus.

When asked if FEMA required all their nurses to be “vaccinated,” the woman said that they were not required and that it was a choice.

So, get this, these federal lackeys are going to be paid to work in the same hospital, with the same patients, treating the same illnesses as those who are being forced to get a shot, which they refuse. These FEMA nurses and doctors are actually taking the jobs of those who are being unlawfully mandated to take and experimental poison into their bodies or lose their jobs.

Mrs. Collard then stated the obvious.

“The Obama administration, back in 2008, created a socialized healthcare system, Obamacare,” she said. “We are now seeing the effects of it.”

“When FEMA comes in, which is a governmental program,” she continued. “They’ve defunded our hospitals with the doctors and the nurses requiring them… those hospitals have literally decided their employees need to get vaxxed or they can leave, but it’s not about that It has nothing to do with that.”

Collard said, “This is a government takeover of our hospital.”

She then calls out the obvious double standard, and I would add that it’s a violation of the Constitution’s protections of equal protection under the law found in the Fourteenth Amendment, Section 1.

She then nails it about what socialized medicine really is and that is government sanctioned, controlled and mandated death care.

Collard called on others to band together to put a stop to this.

She wondered what the unions were saying about this, if they even knew.

Texas Governor Greg Abbott is right in there with it all in his shirking his actual duties as governor to play healthcare CEO in Texas.

In fact, he has been a part of banning local Texas nurses from quitting to work FEMA crisis contracts in the state, but he’s allowing FEMA doctors and nurses from all over the country to come in and steal the jobs of Texas healthcare workers faced with an unlawful mandate.

What’s even more interesting is the entire predictive programming that we have been witnessing for several years now. In this instance, take a listen to this clip from X-Files: Fight the Future, in which a “virus” will be unleashed and the “secret government” will take over. And what is that “secret government”? FEMA.