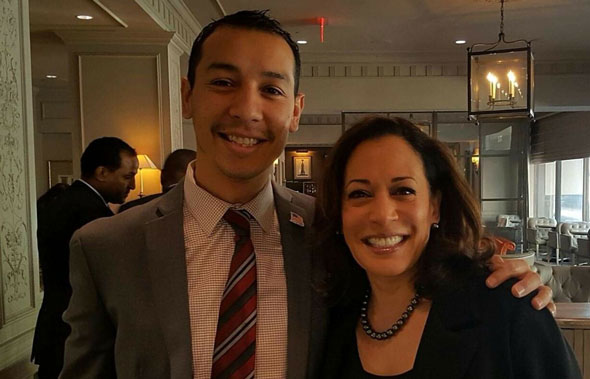 Images have emerged online that show top Democrats Kamala Harris and Rep. Alexandria Ocasio Cortez (D-NY) pictured with a Democratic state senator who was arrested and charged with raping children this week.

Democratic Arizona state Sen. Otoniel “Tony” Navarrete was taken into custody on Friday over allegations relating to a series of child sex crimes, including years worth of sexual abuse against one of his alleged victims, police said Friday.

35-year-old Navarrete is facing seven felonies for child sex crimes after allegedly raping and forcing oral sex on a boy who was 12 or 13 years old at the time.

He is also accused of molesting the boy’s younger brother, who is beleived to have been nine or ten years old at the time.

Navarrete was arrested on multiple charges of sexually abusing children after police secretly recorded a phone conversation with one of his victims where he admits to the crimes and even apologizes to the young boy.

However, newly discovered images have revealed that Navarrete rubbed shoulders with the upper echelons of the Democratic Party.

The photos we shared on social media on Navarrete’s accounts, which have now all been scrubbed.

“Time to elect Joe Biden and Kamala Harris!” Navarrete pitched in a now-deleted Twitter post last year that shows a photo of the accused child rapist with his arm around Harris.

The newly discovered photographs reveal that Navarrete was an extremely well-connected individual.

Senate Democrats released a statement responding to the arrest, saying:

“We are deeply disturbed by what we’ve learned from recent media reports about the arrest of Senator Tony Navarrete.

“These allegations and arrest are serious and deeply troubling.”

From Jeffrey Epstein to Harvey Weinstein, many sexual predators have been suspiciously linked to top Democrat officials.

In May, a California Democrat involved in community outreach programs was arrested on charges of sexually abusing a minor continuously.

As Neon Nettle reported earlier this week, Wall Street financier Howard Rubin was accused of human trafficking and beating and raping several women in a “sex dungeon” in his New York home.