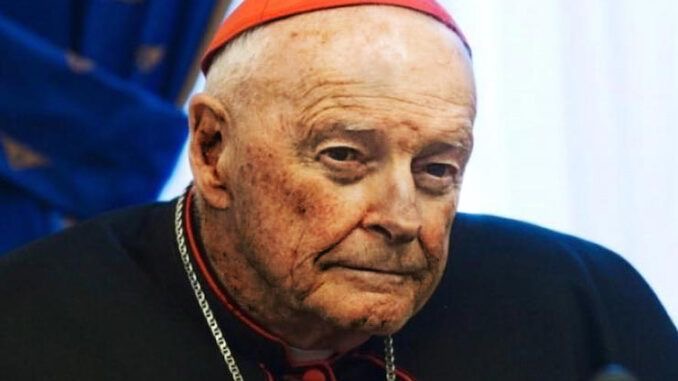 Catholic cardinal Theodore McCarrick, one of Bill Clinton’s spiritual advisors, has been criminally charged for the rape of an underage teenage boy in 1974.

McCarrick served on an advisory committee for the U.S. secretary of state during the Clinton administration and served on the U.S. Commission on International Religious Freedom between 1999 to 2001.

In 2018, the Vatican launched an investigation into the sexual abuse of the former U.S. cardinal leading to a guilty verdict and “dismissal from the clerical state.”

Breitbart.com reports: Prior to his canonical trial, Pope Francis had accepted McCarrick’s resignation from the college of cardinals after revelations of sexual impropriety and abuse spanning decades.

The 91-year-old McCarrick was never tried until now of sexual abuse in a criminal court because his alleged crimes took place outside state statutes of limitation.

By Massachusetts law, however, where McCarrick has been charged, the process was allowed to go forward because McCarrick was not a state resident and by leaving the state, the statute of limitations was effectively suspended.

McCarrick is charged with having sexually assaulted a 16-year-old-boy during a 1974 wedding reception at Wellesley College in Massachusetts. The wedding reception in question was the alleged victim’s brother’s.

The alleged victim claims that McCarrick was a family friend, asserting that McCarrick molested him on numerous occasions on family trips to several states.

“We will look forward to addressing this case in the courtroom,” Barry Coburn, a lawyer for Mr. McCarrick, said in a statement.

In 2020, a lawsuit was brought against the former cardinal, alleging he ran a sex abuse ring of underage boys at his New Jersey shore house in the 1980s.

The unidentified man who filed the lawsuit claimed that in 1982 and 1983, when he was a 14-year-old, he and other victims would go on overnight trips to McCarrick’s beach house in Sea Girt.

“McCarrick assigned sleeping arrangements, choosing his victims from the boys, seminarians and clerics present at the beach house,” the suit stated.

“On these occasions, minor boys were assigned to different rooms and paired with adult clerics,” it added.

According to reports, McCarrick has been living at the Vianney Renewal Center in Dittmer, Missouri, since early 2020.