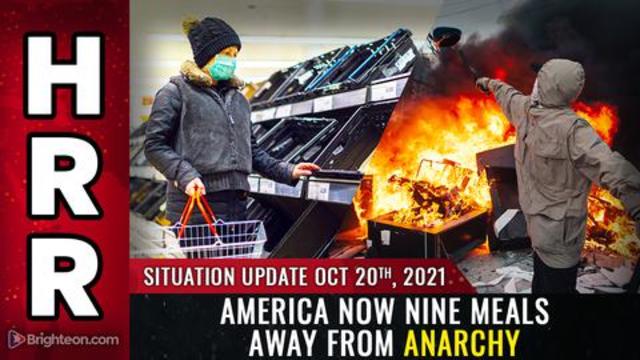 The supply chain crisis being faced by supermarkets is far worse than indicated by mainstream media. While many insist on “temporary” shortages, an industry insider has revealed that things are worse than expected.

According to the unnamed insider, things are as bad as he’s ever seen, saying that he has “never seen anything close to what is happening now.”

In an email, the insider said that his supplier has limited orders for about a month. Meat pricing is “fair” but the prices have skyrocketed. Despite ordering normal quantities, suppliers are usually unable to completely fulfill the orders. Shortages are widespread, and it has gotten worse during the entire pandemic.

Other types of retailers are facing severe supply shocks as well, for instance, prescription drugs are in short supply.

In the first half of 2021, many optimistic economists have assured people that the U.S. economy would be booming by the second half. Instead, the economic infrastructure is being shaken on a very basic level, with most of the country facing enormous price hikes and shortages.

In the U.K., people are also looking into shortages in the food industry — meaning consumers may not be able to find the products that they prefer in supermarkets.

Food and Drink Federation head Ian Wright said at an event that the “just-in-time system” is no longer working. He warned that the U.K. was in for permanent shortages, although this does not mean that the country will run out of food anytime soon.

A spokesman for the government said the U.K. has a highly resilient food supply chain that was able to cope well with unprecedented challenges.

“We are taking steps to support businesses tackle a range of issues, from the pandemic to a Europe-wide shortage of heavy goods vehicle (HGV) drivers.”

He also added that the support included expanding Seasonal Workers Pilot to 30,000 visas for workers to go to the U.K. for up to six months, including a package of measures that help tackle the HGV driver shortage by streamlining the process for securing a license.

The FDF represents over 800 food and drinks companies in the United Kingdom. According to Wright, the U.K. shopper and consumer could have expected that just about any product they want to be on the shelf or in the restaurant menu all the time. However, things have changed, and as the sector adapts to structural changes in the labor market, Wright said that firms need to make decisions about the products that need to be prioritized. (Related: Massive U.S. food shortage coming – get a backup supply ready RIGHT NOW.)

Several companies, including supermarkets, pubs and restaurants have blamed the lack of HGV drivers for causing problems in the supply chains, including shortages of some products. Driver shortages have also been blamed on workers leaving the U.K. following Brexit as well as during the pandemic. Tax changes also make it more expensive for drivers in Europe to work or be employed in the United Kingdom.

Even in the U.S., food shortages also come from the shortage of truck drivers. Many industries are struggling to keep and retain workers, including the trucking industry, which is important in the American economy.

A Wichita, Kansas, driver said he worked every stretch of the trucking industry for over 20 years and companies today are offering higher salaries to attract new drivers. However, they still come away with far less money and more time away from home. “Over the roadside, you’re on a 70-hour workweek. You’ve got the newer generation that once they get in there and they’re gone for three or four weeks on the road, and they realize they’re not getting home, they don’t want to do it anymore,” he said.