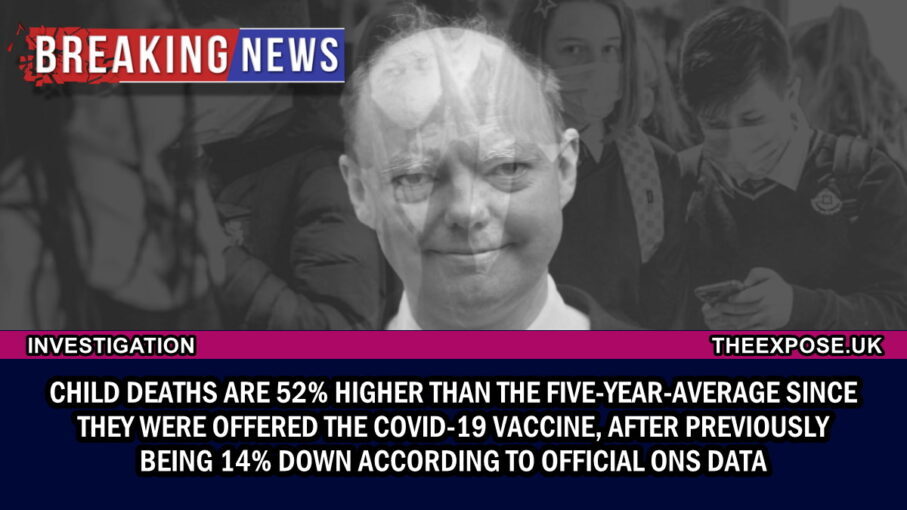 New data published by the Office for National Statistics has revealed that the number of children to have died since Chris Whitty advised the Government they should be offered the Covid-19 vaccine is 52% higher than the five-year-average, after previously being 14% down on the five-year-average up until the Joint Committee on Vaccination and Immunisation being overruled. On September 13th 2021, the four Chief Medical Officer’s (CMO’s) of the United Kingdom wrote to the Government advising them to offer all healthy children over the age of 12 a single dose of the experimental Pfizer mRNA Covid-19 injection. The most important public health benefit the CMO’s assessed to allegedly shift the risk-benefit ratio in favour of vaccinating children was impact on education.

However, the Covid-19 vaccine does not prevent infection or transmission of the alleged Covid-19 virus, as is evident from the fact that excluding people under the age of 18 the vast majority of cases between September 13th and October 14th 2021 were among the fully vaccinated population.

So therefore, the decision of Chris Whitty, the Chief Medical Officer for England, and his colleagues to overrule the Joint Committee on Vaccination and Immunisation by advising the Government all children over the age of 12 should be offered a Covid-19 vaccine, was based on an outright lie.

As confirmed by official NHS data which shows that between March 2020 and October 6th 2021, a period of 19 months, there have been just 62 deaths among people under the age of 19 in England’s hospitals after they had tested positive for Covid-19. With 48 of these deaths occurring in people who had other extremely serious underlying conditions.

But data published by the UK Health Security Agency also shows that even if children were at risk of being hospitalised and dying due to Covid-19, that the Covid-19 injection would not do a lot to prevent it, because between September 13th and October 11 2021, over 80% of alleged Covid-19 deaths occurred among the vaccinated population, with 1 death even occurring among a vaccinated person under the age of 18.

Nevertheless, children over the age of 12 are still being given the experimental Covid-19 injection, the question is whether it is killing children like we have seen in the USA (source).

Chris Whitty advised the UK Government to roll-out the Pfizer Covid-19 vaccine to all children over the age of 12 in week 37 of 2021. Thanks to preparations already being made by the NHS to intrude on education in schools and administer the jab to children the programme got underway the following week (week 38).

Official Office for National Statistics (ONS) data shows that between week 38 and week 40, the five-year-average number of deaths occurring among children aged between 10 and 14 was 17.

However, the latest data available from the ONS shows that between week 38 and week 40, the number of deaths occurring among children aged between 10 and 14 was 26. This represents a 52% increase on the five-year average.

Sixteen of those deaths were among boys, representing a 60% increase on the five-year-average in which there had been 10 deaths among boys between week 38 and week 40.

Whilst 10 of those deaths were among girls, representing a 43% increase on the five-year-average in which there had been 7 deaths among girls between week 38 and week 40.

What’s even more concerning about the above numbers though is that deaths among children aged between 10 and 14 were significantly lower than the five-year-average up to the point Chris Whitty advised the Government to offer all children over the age of 12 a Covid-19 vaccine.

Official Office for National Statistics (ONS) data shows that between week 1 and week 37, the five-year-average number of deaths occurring among children aged between 10 and 14 was 207.

However, it is known that children deemed to be vulnerable to Covid-19 due to certain underlying conditions were already being offered a Covid-19 injection prior to Chris Whitty’s decision to overrule the JCVI and offer the jab to all healthy children. The above graph, taken from the UK Health Security Agency ‘Vaccine Surveillance’ report shows that vulnerable children started to be given the Covid-19 vaccine around week 31 of 2021. It also shows the notable uptick in vaccination of children following Chris Whitty’s decision.

We’ve compiled the following table on the ONS data: Correlation does of course not always equal causation. but he Medicine and Healthcare product Regulatory Agency (MHRA) have openly admitted that they suspect myocarditis and pericarditis are potential side effects of the Pfizer and Moderna Covid-19 vaccines, especially among young males.

A suspicion that has been strong enough for the UK Medicine Regulator to officially add warnings about myocarditis and pericarditis to the safety labels of the Covid-19 vaccines. The admittance from the UK Medicine Regulator that myocarditis is a suspected side effect of the Pfizer Covid-19 injection is extremely concerning once you see further data published by Public Health England on the number of emergency calls made requesting an ambulance due to cardiac arrest.

We’ll never know because the authorities will never admit that an unnecessary vaccination programme of which they have spent billions of tax-payers money to roll-out has killed the very people it was allegedly supposed to protect.

But the evidence strongly suggests that the Covid-19 vaccines are killing children, with a 52% increase in child deaths against the five-year-average since Chris Whitty advised the Government to roll-out the jab to all healthy children over the age of 12.