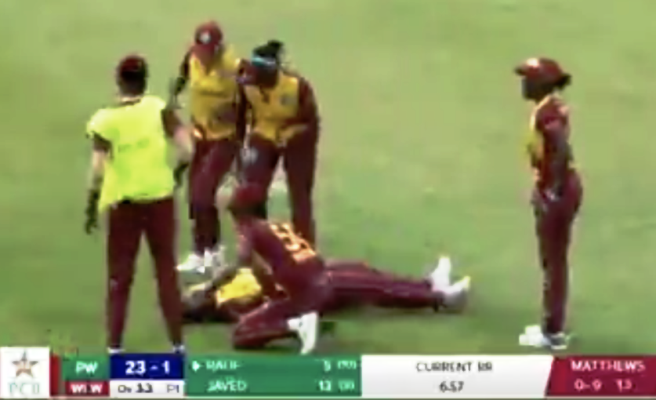 Two Windies professional cricketers collapsed on the field on Friday. Chinelle Henry and Chedean Nation suddenly fell down on the ground and started convulsing during an international match against Pakistan in Antigua. The two incidents were therefore captured on camera.

The two cricketers are currently “stable”, according to reports. Footage from the international match showed two West Indies women’s team players pass out on the field just days after announcements that the team had been fully vaccinated.

Only three days before the match, the team, including management staff, received their second vaccine doses, according to social media reports and team announcements. “WI are Vaccinated and ready to face Pakistan Women!” the team wrote on Twitter.

In the middle of the game, the first player suddenly collapsed on the field and began to convulse as team members desperately called for medical attention. The player was carried off on a stretcher.

Within minutes, just as the game was about to resume, a second Windies player collapsed. Announcers were flabbergasted by the dramatic events. “Jack, actually we’re getting word that there’s a second West Indies player down,” one said.

“Is there something in the air?” asked another commentator. “I don’t know. This is unusual.”

After rife speculation on social media, videos of the two players were uploaded claiming they were fine, but some fans pointed out that the videos were not recent.

Both the incidents took place within a span of 10 minutes and therefore the match was not stopped. The media claimed that the reasons for the sudden collapse were “unknown”, but both had to be rushed to hospital for emergency care. Remarkably, no explanations were given for these sudden collapses.