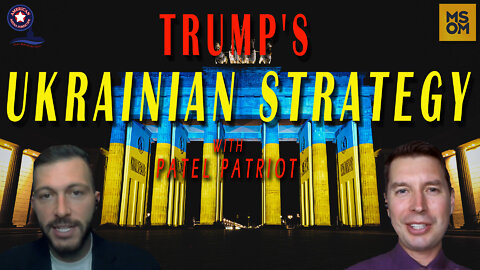 In this episode of MSOM, Sean Morgan interviews Patel Patriot about his research in Devolution Part 17 and his latest analysis of the war in Ukraine.

Patel! OMG! That will be Awesome when you HEARD “Madam speaker, the President of the United State!” and then Trump walks out! LOL! I will sh*t myself!

Wow!! I sure hope these very bad politicians go to jail soon & the money laundering taken care of!!And these rich oligarchs get put away!!

Putin is not invading, he is taking out the Oligarchs, Cabal, Central bankers, Tunnels & DUMBs to liberate all the Human Trafficking captives and destroting the tunnels and DUMBs, he is also taking out all the US/Ukraine Bio Labs that are thet rue labs all these Biological weapins are made from, like AIDs, Sars, H1N1, Zika and many more. Those Bio Labs are right on the Ukraine/Russia border. If you watch the ctizens in the Ukraine they are putting out videos saying and showing that there is no war in Ukraine. Putin also put out a video that he says it is a Special Military Operation to take out the Neo-Nazi and Corrupt Government and freeing the people from 8 years of genocide. I have all those videos as do 10′s of thousands of other Patriots also have. Putin is rebuilding the Church in Russia, he was the first Leader that cleaned the Oligarchs, Cental Banks, Neo-Nazis that were in Russia, and creating a new Asset back Currency in Russia. All the Ukraine citizens I have seen videos from say Ukraine citizens want to re-merge into Russia. Last number I heard there is over 6 million Ukraine citizens who have already filed & got their Russian Citizenship.

People need to completely shut off ALL FAKE NEWS MSM and all their media outlets and formats as they are not showing any truth of what is going on around the world, they actually use old photos and video feed to try to pass it off as trurh, but it is all lues, misinformation, cover-ups, distractions, division plus they push fear, worry, panic, hatred, anger race wars, division and do so with False Flag events or if you prefer, Staged Events to cause division, race wars, anger and hatred. They know they can control and brainwash the public through the MSM make you do exactly what they want you tod o, what to buy, like, love, hate, what to think, who to vote for, and that is done by polls which is a weapin of control on the public, they choose the control group and that is suppose to be what 150 million people think.