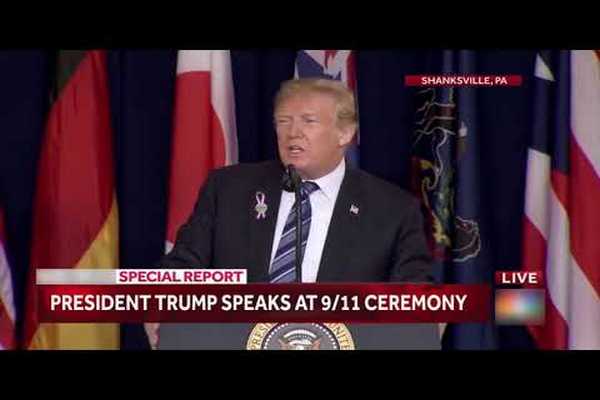 For the great people of our Country, this is very a sad day. September 11th represents great sorrow for our Country. Many things were displayed that day, including most importantly the bravery of our police, fire, and first responders of every kind. The job they did was truly unbelievable. We love them, and we thank them.

It is also a sad time for the way our war on those that did such harm to our Country ended last week. The loss of 13 great warriors and the many more who were wounded should never have happened. Overall, 250 people were killed in Afghanistan last week and so many more were seriously injured. We had $85 billion of the finest and most sophisticated military equipment taken from us without even a shot being fired. The leader of our Country was made to look like a fool and that can never be allowed to happen. It was caused by bad planning, incredible weakness, and leaders who truly didn’t understand what was happening. This is the 20th year of this war and should have been a year of victory, honor, and strength. Instead, Joe Biden and his inept administration surrendered in defeat.

We will live on, but sadly our Country will be wounded for a long period of time. We will struggle to recover from the embarrassment this incompetence has caused. Do not fear, however. America will be made great again!

They did this strike quickly, in order to show they are tough. Instead, they killed a USAID worker and many children. This is what happens when you have grossly incompetent people at the helm. The Afghanistan tragedy will further mark what should have been an honorable and dignified September 11th. The Administration’s surrender will go down in infamy.

Has anybody noticed that the Biden Administration, working in close conjunction with the Fake News Media, has promoted mandates very hard in order to get people to stop talking about the most incompetent withdrawal from a war site in history? They will talk about anything, other than the Rigged 2020 Presidential Election results, in order to get people’s minds off of the horror show that has just taken place in Afghanistan!

Congratulations to Rudy Giuliani (for the 20th time!), the greatest Mayor in the history of New York City, for having shown such leadership and doing such an incredible job during and after the attack on our Nation!