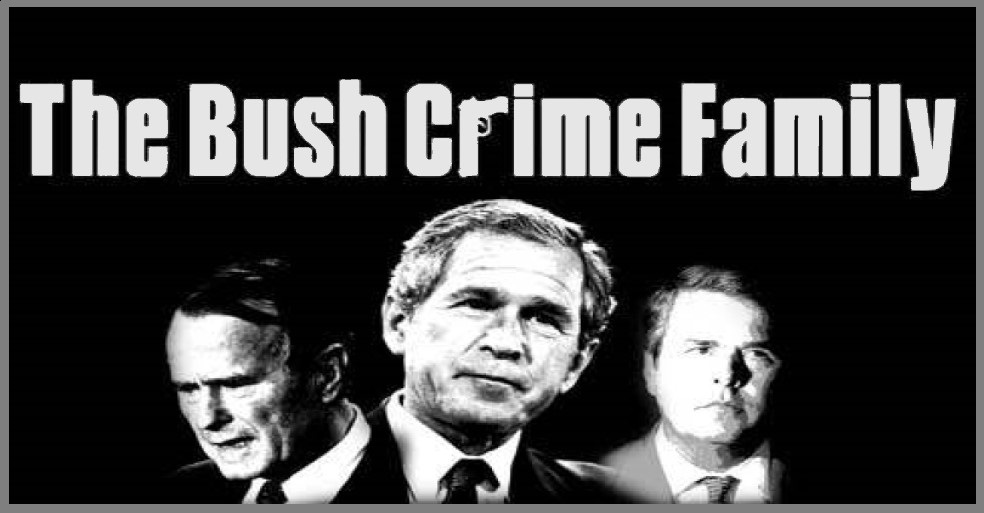 The Bush Crime Family – Three Generations of Treason (Must Video)

There have been terrible crimes and criminals in United States history – but because the Bush family has passed their misdeeds down through generations, they are unequivocally the most corrupt.

Rarely has there been a whole family of underhanded criminals where nefariousness was the rule rather than the exception. It’s not as if they have no code of conduct, the facts prove they lie, cheat and steal as their code of conduct.

George H.W. Bush was a pure warmonger who dedicated his life to LIES, WARS, COUPS, MILITARISM, REGIME CHANGES and claiming through it all AMERICAN EXCEPTIONALISM.

What followed George H.W. Bush were trails of blood, death and tears with NO ACCOUNTABILITY.

Those who came after George H.W. Bush believed they could follow in his steps and not fear accountability for their actions.

The Bush Crime family was behind Noriega, Oliver North, the invasion of Panama, Clinton’s, his sons, pardoning the criminals of Iran-Contra, the wars of Central America, support of Saddam Hussein, launch of the Gulf War, Twin Towers (911), Nebraska Sex Crimes and many, many more.

George H.W. Bush was a tyrant in his policies, politics, drugs and mass-killings – not to mention the experiments carried out through the CIA, making him the country’s worst war criminal.

George Bush’s grandfather, the late US senator Prescott Bush, was a director and shareholder of companies that profited from their involvement with the financial backers of Nazi Germany.

Documents reveal that Prescott Bush worked for Brown Brothers Harriman (BBH) and acted as a US base for the German industrialist Fritz Thyssen, who helped finance Hitler in the 1930s.

Fritz Thyssen owned the largest steel and coal company in Germany and grew rich from Hitler’s efforts to re-arm between the two world wars.

The Bush Crime family has links to the Consolidated Silesian Steel Company (CSSC), based in mineral rich Silesia on the German-Polish border.

During World War II, the Consolidated Silesian Steel Company (CSSC) made use of Nazi slave labor (jews) from the concentration camps, including Auschwitz. Mainstream Media won’t tell you any of this because they work for The Deep State as well.

The Auschwitz concentration camp was the largest camp in the process of the mass extermination of the Jews. About 197 thousand Jews were deported there in 1942, about 270 thousand the following year, and over 600 thousand in 1944, for a total of almost 1.1 million.

Historians estimate around 1.1 million people perished in the Auschwitz concentration camp during the less than 5 years of its existence. The majority, around 1 million people, were Jews.

The entire Bush Crime Family (Prescott Bush, George Bush and George W Bush) went to Yale where they were, like their descendants, were members of the secretive and influential Skull and Bones secret society (Illuminati and The Deep State.)

The Rockefeller cabal uses its powerful networks of foundations, personalities (Hollywood and Main Stream Media), and politicians to advance its causes, which are hidden in plain site.

The Rockefeller and Rothschild families, along with the Vatican, control all banks, which control all media, to feed people of the world lies.

The Federal Reserve is outside of the United States government (like the CIA) and is involved in stock market manipulation and other crimes.

The Vatican is used to launder money for governments of the world.

The Bush Crime Family and Rockefeller family are responsible for the fall of JFK, 911 and many other crimes against humanity.

These entities are evil and see people as cattle.

George W. Bush has admitted that the Constitution is “nothing but a goddamned piece of paper.”

David Rockefeller wrote in his memoirs that he is proud to be an advocate of world government.

The well-known Rockefeller Foundation, Carnegie Endowment, Ford Foundation, MacArthur Foundation and a slew of other less prominent non-profit organizations collaborate on specific domains, with minimal publicity, to forge and implement their plans (controlling the world through media.)

What was in the envelopes at George H.W. Bush’s funeral?

What did the envelopes at George H.W. Bush’s funeral say?

It is said George H.W Bush was allowed a proper funeral if he exposed members of the Deep State, hence this note in the envelopes.

The well-publicized Skull & Bones fraternity, in particular, and Yale generally, have provided an inordinate number of men to the OSS and CIA.

William F. Buckley, George H W Bush, James Jesus Angleton are but a few of the famous elitists who claim Yale as their alma mater and who were elite, important and powerful.

George Bush’s connections with intelligence reach back to World War II, along with his involvement in the murder of John Kennedy.

The CIA has infiltrated every single federal agency without exception and thus provides information and control of government by the controllers of the CIA.

The CIA is NOT part of the United States government; they are an outside entity that answers to no organization but the elite secret cult societies.

It’s said many in the Deep State, if not all, are being arrested and executed for their crimes against humanity. Millions of people are waiting for this.

President Trump is said to finish what John Kennedy started: THE DRAINING OF THE SWAMP, and it runs VERY DEEP.

There is a new and updated lists that has been confirmed with many more added to it. The deal that they got was that if they gave information that was useful, they could have a better death or a jail cell for life.

This information will give you 20/20 vision to see through the Illusion of the Matrix.

Here you will see some of ‘The Movie’ players/actors.

Be sure to show this to your skeptic friends who say nothing is happening.