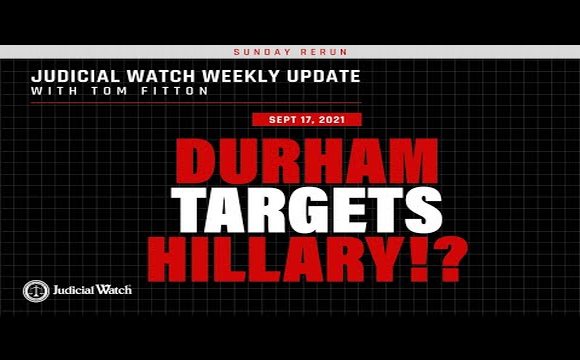 The wheels of justice grind slow—much to the exasperation of, well, everybody. In April 2019, Attorney General William Barr appointed federal prosecutor John Durham to get to the bottom of the Russia mess: the sensational allegations, both before and after Donald Trump’s November 2016 presidential election victory, of Trump connections to dirty Russian money, dirty players, and dirty deeds.

Testifying before a Senate subcommittee, Barr said he wanted a review of “both the genesis and the conduct of intelligence activities directed at the Trump campaign during 2016.” Durham’s mandate: investigate the investigators—particularly the FBI. What did the FBI know about Trump’s accusers and when did they know it?

In a single count false-statements indictment of a middling Washington player named Michael Sussmann, Durham presented damning evidence of collusion between the Clinton presidential campaign and the FBI in a scheme to destroy Donald Trump.

Sussmann spent twelve years as cybersecurity prosecutor at the Justice Department before joining the prominent Washington law firm Perkins Coie. At the firm, Sussmann represented the Democratic National Committee in matters related to the Russian hacking of its email servers and “met and communicated regularly with the FBI” about the case, according to the indictment. At the same time, Sussmann “was also advising the Clinton campaign in connection with cybersecurity issues.”

Perkins Coie had many big clients, but in 2016 none bigger than the Clinton presidential campaign. The Sussmann indictment notes that the Clinton team hired “Law Firm-1” as counsel for the election and that “Campaign Lawyer-1” acted as the campaign’s general counsel.

Aside from Sussmann, no one is identified by name in the indictment. But so much other additional information is provided, connecting the dots is not difficult. News reports, for example, quickly identified “La Firm-1” as Perkins Coie and “Campaign Lawyer-1” as Perkins Coie partner Marc Elias.

Keep an eye on Elias, he’ll play an important role later. And remember the context: in 2016, Trump was widely viewed as the likely loser of the election, so Perkins Coie represented a kind of administration-in-waiting for many ambitious souls.

“Sussmann is not a small fish,” says Judicial Watch President Tom Fitton. “Sussmann is a big fish in a small pond of co-conspirators who were targeting Trump—including Hillary Clinton.”

The indictment alleges that Sussmann lied to the FBI—that is, lied to “the FBI General Counsel”—at the time, James Baker—in a September 19, 2019 meeting, when he delivered documents claiming to show communications between the Trump Organization and Russia’s Kremlin-connected Alfa Bank.

“During the meeting,” the indictment notes, “Sussmann lied about the capacity in which he was providing the allegations to the FBI.” Sussmann told the FBI he was not delivering the Alfa Bank report “for any client,” when in fact he was working for two very important clients: the Clinton presidential campaign and “a U.S. technology industry executive (‘Tech Executive-1’) at a U.S. Internet company.”

“Tech Executive-1” was soon revealed by media reports to be Rodney Joffe, a senior vice-president at the internet security firm Neustar. Not noted in the indictment but of interest to followers of the human comedy, Joffe was angling for a top job in the new Clinton administration.

Using Perkins Coie billing records, Durham nails the Sussman connection to Joffe, Elias, and the Clinton campaign. Sussman, the indictment states, “coordinated and communicated” about the Alfa Bank allegations “during telephone calls and meetings with Elias and Joffe, which he “billed to the Clinton campaign.”

Joffe got plenty of help in his scheme to show a Trump connection to Alfa Bank, including three computer scientists. The scientists are not named in the indictment, but later were identified in news reports.How To Easily Manifest Anything You Wish Using Quantum Physics

Joffe “exploited his access to non-public data” and enlisted “the assistance of researchers at a U.S.-based university” who were analyzing Internet data in connection with a “pending federal government cybersecurity research contract,” the indictment notes.

In the indictment, Durham presents considerable evidence that Sussman, Joffe & Co. had little interest in the truth about Alfa Bank. The “storyline you have”—the storyline of a Trump connection to the Kremlin’s Alfa Bank—“does not make much sense,” one of the computer scientists emails Joffe. Another computer scientist emails the team, “we don’t see the money flow, and we don’t see the content of some message saying ‘send the money here.’”

But of course the truth was not the point. The point, the goal—the only goal—was to get the FBI to open an investigation into Trump and Alfa, and then leak the story to the media, dealing a deadly blow to the Trump campaign.

Durham quietly nails this down with another damning connection—the role of the investigative firm Fusion GPS, identified in the indictment as the “U.S. Investigative Firm.”

Aficionados of the Russia scandal will recognize Fusion GPS. It is the originator of the notorious Steele Dossier—the crazed and influential compendium of Russia-related smears against Donald Trump. The Sussmann indictment reminds us that Perkins Coie was the money behind Fusion GPS. The middle man between the investigative firm and the Clinton campaign? Marc Elias.

“Throughout the Presidential campaign,” the indictment notes, “the U.S. Investigative Firm”—that is, Fusion GPS—worked with Perkins Coie, “members of the media, and others to gather and disseminate purported evidence of Trump’s ties to Russia.”

The Perkins Coie billing records show that Sussman and Elias met with personnel from Fusion GPS about Alfa Bank. Sussmann billed the meeting to the Clinton campaign.

Sussmann and Joffe—“Tech Executive-1”—also “coordinated…with representatives and agents of the Clinton campaign” on data and written materials that Sussmann gave to the FBI and the media, the indictment notes.

Elias, according to the indictment, speaks with Sussmann about efforts to interest the media in the story. Elias also exchanges emails about Alfa Bank with senior Clinton campaign officials. They’re not named in the indictment, but news reports identify them as campaign manager Robby Mook, communications director Jennifer Palmieri, and foreign policy adviser Jake Sullivan. Sullivan currently serves as the Biden Administration’s national security adviser.

For the conspirators, everything rides on September 19 meeting. It is not an encounter of strangers. Sussmann is a familiar figure to the FBI’s Baker. And as a longtime Washington hand, Baker surely knows of Perkins Coie’s role in the Clinton campaign.

The indictment notes that Sussmann offers to Baker “three ‘white papers’ along with data files allegedly containing evidence supporting the existence of this purported secret communications channel” between Trump and Alfa Bank.

According to the indictment, Baker seems unconcerned about Sussmann’s motives. Sussmann states he is not presenting the extensive, highly detailed material “for any client.” Baker concludes Sussmann is just “acting as a good citizen merely passing along information,” the indictment reports.

An FBI investigation commences. The news leaks. The media report that Trump is under federal investigation for connections to a suspicious Russian bank.

For the FBI, the charitable explanation for this seemingly colossal act of Keystone Cops stupidity—believing that “good citizen” Sussmann was merely wandering in with reams of technical documentation about a leading presidential candidate—is that Baker immediately realized that Sussmann was lying, and let him, in order to draw out more evidence of the scheme.

The more sinister explanation is that the FBI was hearing exactly what it wanted to hear. It used the Alfa Bank allegations to undermine a presidential candidate viewed with alarm by many of the bureau’s leadership.

The big question now: is this the beginning of the Durham revelations, or the end? Is Durham tying up loose ends—the statute of limitations was about to run out on the Sussmann false-statements case—or will he press on?

Certainly there are many unanswered questions.

Most importantly: what is the degree of FBI and Justice Department culpability in triggering unethical and possibly illegal probes of Trump?

What role did Jake Sullivan—then a key Clinton campaign official and now the national security adviser to President Biden—play in the Alfa Bank affair and other efforts to tarnish Donald Trump with Russia allegations?

What role did other top officials of the Clinton campaign play in the Alfa Bank affair and other efforts to tarnish Trump?

How did cybersecurity expert Rodney Joffe and his team of computer scientists access private computer data and what else, if anything, did they do with it? Were crimes committed?

What role did Fusion GPS play in accessing private computer data and what else, if anything, did they do with it?

One clue to Durham’s intentions: following the Sussmann indictment, he hit Perkins Coie with additional subpoenas for documents. Investigators “appear to be sharpening their focus on the Democratic political machinery during the 2016 campaign and efforts to tie Trump to Russia,” CNN reported.