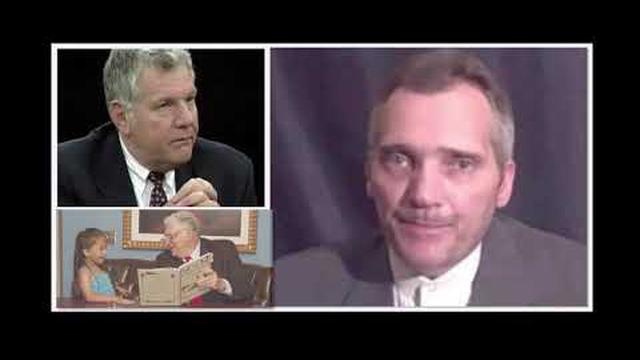 “One such Grover was Ronald Reagan’s then Secretary of Education, Bill Bennett, Bill Bennett, who later became “Drug Czar” during the Bush Administration, wrote the so-called Book of Virtues and was/is? vying for the office of President. Bennett is apparently very close to his brother and fellow Grover, Bob Bennett. Although Bob Bennett holds the position of Legal Counsel to President Clinton, it is apparent that the brothers recognize no party lines.

When Bill and Bob Bennett together sexually assaulted my daughter, Kelly, and me at the Bohemian Grove in 1986, I had already known Bill Bennett as a mind-control programmer for some time. Bennett anchored his Jesuit/Vatican based programming of me in my Catholic conditioning initially instilled via the Rite to Remain Silent. Through further manipulation of my inner dimensional” perceptions, Bennett believed he had forever compartmentalized his personal secrets of perverse sex with his brother, Bob, and my then six-year old daughter. Bennett also had manipulated my mind in accordance with Vatican “Orders” via Byrd’s Jesuit College programming center in West Virginia. He used his role as Jesuit programmer for the purposes of carrying out his efforts as Education Secretary to implement Education 2000.”