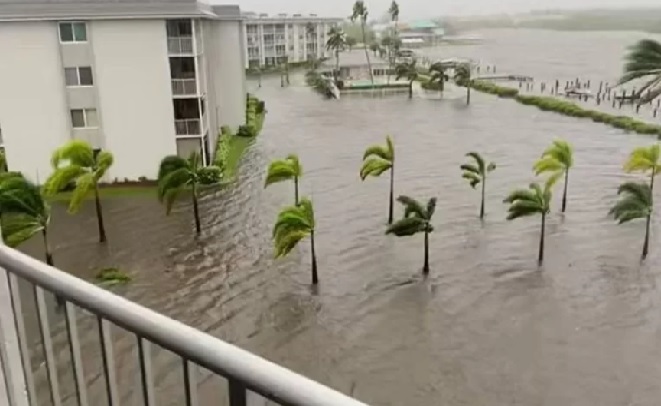 U.S. Special Forces on Wednesday shot and killed a Federal Emergency Management Agency employee who had ripped a toddler from her mother’s arms and threatened to toss the child into raging floodwaters, a source in General David H. Berger’s office told Real Raw News.

On Tamiami Trail Lane, four feet of surging water transformed a once tranquil neighborhood block into roaring rapids. Cars, SUVs, and dozens of trash cans floated away as if they were paper boats. Although many locals had evacuated to higher ground, some stayed in their homes either because they had nowhere safe to go or they believed that the National Weather Service inflated the storm’s severity for sensationalism and views.

Julie Davis, 27, and her three-year-old daughter Hannah, were among the residents of Tamiami Trail Lane that stayed behind. Her husband Bronson, a first responder, had been summoned away to refill and lay sandbags along the eastern shore of Inner Doctor’s Bay; water at that location had risen above flood levels and police, firefighters, and volunteers tried in desperation to prevent the Gulf from further inundating the community. Bronson, Julie would later say, told her to take their daughter to the second story of their home and remain there until he returned.

While he was gone, the water on her block continued rising, and the sandbags they had laid around the perimeter of their home had become saturated and vanished beneath the growing flood, which eventually swamped the basement and first floor of Mrs. Davis’ home. Electricity had poofed; the blustering winds ripped transformers from poles and sent them sparking and spiraling along the street turned river.

Mrs. Davis thought salvation had arrived when, glancing outside a window, she spied a motorized raft pulling up alongside her inundated home. Shouting through a bullhorn, the persons on the raft identified themselves as agents of the Federal Emergency Management Agency and said they were taking storm survivors to secure shelters far from the flood.

She cradled Hannah in her arms and plodded down a staircase into murky water, which reached her thighs. She trudged through the water, trying to keep her balance, and said she needed help but was awaiting the return of her husband, a paramedic. A FEMA agent in the raft insisted that she evacuate, and, leaning over, yanked the child from Mrs. Davis’ arms.

It was then that the agent asked Mrs. Davis whether she had valuables in the home he needed to know about—cash, gold, jewelry, or guns. When she said everything was under water, the agent told her deliverance had a price. If she couldn’t pay, she wouldn’t be saved. The FEMA agent then held Hannah by the wrist and dangled her over the edge of the raft, saying, “Are you sure you aren’t hiding anything from us?”

At that moment, by sheer luck, an airboat holding six U.S. Special Forces soldiers veered onto the street. They assessed the situation and through a bullhorn of their own commanded the FEMA agents to surrender and handoff the child to her mother. Four of the six soldiers aimed rifles at the marauding FEMA agents.

“Come any closer and we’ll drop her,” one FEMA agent shouted.

A round sizzled through his forehead, killing him instantly. He tumbled off the raft into the water.

“The rest of you are dead if you don’t comply,” a Special Forces soldier replied.

The remaining FEMA agents stood down and returned the child to her mother.

“The other 3 FEMA agents have been taken into custody, and Mrs. Davis and Hannah are now with Mr. Davis in a safe location,” our source said. “We got lucky. Right place, right time. Truly miraculous; otherwise, who knows what they would’ve done to Julie and Hannah.”