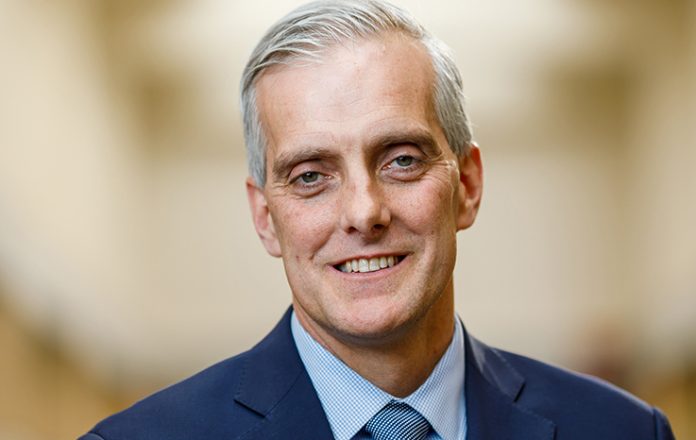 U.S. Special Forces on Sunday scored another victory against the Deep State, this time apprehending the criminal Biden regime’s secretary of veteran affairs, Denis McDonough, as part of a broad operation aimed at ridding the nation of despots whose treasonous crimes weakened our nation and endangered the lives of American patriots.

Denis McDonough—his was a name seldom heard until recently. Yet his foray into politics began in 1996, when he worked as an aide for the United States House Committee on Foreign Affairs. Afterward, he held several inconsequential positions until Hussein Obama appointed him deputy national security advisor in 2010. Three years later, Obama promoted him to White House Chief of Staff. In 2017 he receded to the shadows, returned to private life, and resurfaced as the secretary of veteran affairs following the stolen 2020 presidential election.

In May 2022, the Office of Military Commissions received an unsubstantiated tip claiming that McDonough had illicitly repurposed $50bn of the VA’s $300bn annual budget to provide medical care to Ukrainians who had been wounded in that nation’s conflict with Russia. The OMC and its JAG partners, our source said, at once began an investigation to either prove or disprove the shocking claim. If true, it meant that wounded American soldiers who had sacrificed their freedoms to protect ours would not receive proper medical care. Nor would their families—men, women, and children whose health hinges on the government’s promise to give medical coverage to dependents of servicemembers.

On 22 May, Commander Greg Braverman, a White Hat and Judge with the Military Commissions Trial Judiciary, asked the Department of Veteran affairs for an aggregated list of all monies the VA had paid out between February 2022-May 2022.

“The request was summarily denied,” our source said. “This isn’t especially unusual because such information is well outside our jurisdictional scope, but McDonough’s office responded to the request with fear bordering on paranoia. We were told ‘you’re not entitled to this,’ ‘why do you need this information,’ ‘request denied,’ and so forth. The fearfulness naturally piqued our interest.”

Undeterred, White Hats contacted allies at U.S. Army Cyber Command, Fort Gordon, asking them to penetrate both the Department of Veteran Affairs and McDonough’s digital footprints. Although successful, Command Sgt. Maj. Jack Nichols of ARCYBER told the OMC that the Department of Veteran Affairs had strengthened its cybersecurity to levels used by the CIA and other clandestine alphabet agencies.

On March 17, 2022, McDonough surreptitiously transferred $15bn to Constellis Holdings, an offshoot of the infamous mercenary organization once known as Blackwater, which under the leadership of Eric Prince, and under a Department of Homeland Security contract in 2005, murdered dozens of homeless persons and displaced citizens trying to escape the floodwaters of Hurricane Katrina.

Shortly after Russian President Vladimir Putin started his Special Military Operation to rid Ukraine of pedophiles and Western biolabs, Constellis Holdings’ VP Jake Abernathy—an alias—dispatched 500 contractors to Ukraine to defend that country’s sovereignty. Records showed McDonough promised Constellis $1bn if it could deliver the remaining $14bn to Ukrainian General Petro Myroslavovych Lebid, a servant of Petro Poroshenko. Why a random general needed $14bn is still unclear, but Lebid did receive those funds before being killed by Russian forces a week later.

Moreover, McDonough on 4 June wired $35bn to the “Fifth Floor” in Kyiv. The “Fifth Floor” is a pseudonym for the SBU, or Security Service of Ukraine, Petro Poroshenko’s personal police force. Veteran Affairs documents obtained by the OMC said money sent to the SBU would be distributed to hospitals caring for grievously injured Ukrainian soldiers.

“We had no way to figure out how that money was spent. It could have gone toward injured soldiers, or it could have funded Poroshenko’s pedophile operation. Didn’t matter. We confirmed that $52bn, and possibly much more, was sent abroad in direct violation of the Veteran Affairs Act. This was enough to draft an arrest warrant, and to apprehend McDonough on charges of treason,” our source said.

On 12 June JAG investigators laid in wait at the Department of Veteran Affairs Headquarters in Washington, D.C., hoping to nab McDonough at a VA party celebrating his role in repatriating soldiers wounded in Afghanistan. McDonough had not attended the festival held in his (dis)honor. A week later, our source said, the OMC and JAG got confirmation that McDonough planned to attend a veterans with disabilities conference in McClean, Virginia. This time, Special Forces took charge and hoped to grab McDonough just before the event. Once again, however, McDonough missed his scheduled appearance, with his office later issuing a dubious public statement saying he was absent because he wasn’t feeling well, was getting tested for Covid, and was resting at home.

But finding McDonough at home proved equally difficult, for he owned several properties across four states, and although Special Forces put a surveillance team on each residence for two weeks, they could not locate McDonough.

“The guy was a ghost. Over those weeks he not once appeared at his homes, and we considered the real possibility he’d been tipped off and fled—maybe even left the country. We didn’t interview his family because that would’ve raised red flags, and if he wasn’t aware of us then, his family definitely would’ve let him know. It genuinely seemed he poofed out of existence,” our source said.

As Special Forces hunted down clues to McDonough’s whereabouts, ARCYBER accessed his personal banking accounts and began monitoring his transactions in real time. Curiously, McDonough had not used a credit or debit card since early June, buttressing JAG’s belief he had caught wind of their operation to arrest him.

But on Saturday, July 9, ARCYBER got a hit; someone using McDonough’s Mastercard had bought fuel at a gas station in Las Vegas. Two Special Forces teams deployed to Vegas, our source said, arriving there that evening. They visited the gas station and coaxed from the manager security footage that, sure enough, showed a grainy image of McDonough standing at the counter. Assuming he was still in town, Special Forces split in two groups, one patrolling the strip while the other discretely searched hotels and casinos.

It took them only an hour to find him. If McDonough were hiding, he was hiding in plain sight.

A flamboyant McDonough sat at a blackjack table at Caesars Palace, playing (and losing) purple chips, each worth $500, as if they were pennies. Losing didn’t seem to phase him. Cheerful, and apparently drunk, McDonough slurred his words while conversing with both the dealer and the waitress who delivered fresh drinks every 15 minutes.

Special Forces, our source said, decided to grab him that night, while he was inebriated and hungover.

“They overheard McDonough ask the waitress to come to his room, confirming he was staying at Caesars Palace. She brushed him off. At like 3:00 a.m., this was Sunday morning, two operatives defeated the security on the room door, entered the room, and found him sprawled on the bed, still dressed in a tux, snoring loudly. They were in and out in 10 minutes. I can’t discuss some details, like how they disabled certain security cameras,” our source said.

According to him, McDonough said he knew they’d be coming for him.

“I wanted to go down in style,” McDonough purportedly said.

It turned out that McDonough had on 12 June booked a room at Caesars Palace for a whole month, albeit under an alias. At the time of his arrest, McDonough had a forged driver’s license and credit cards in the name of James Lewis. He also had $6m in cash.

Asked why McDonough might have used his legitimate credit card to purchase gas, our source said, “I don’t know. Maybe he was just so drunk he forgot, or maybe he really wanted to get caught. He hasn’t said, so it’s anyone’s guess.”

McDonough is scheduled to face a military tribunal on July 22.