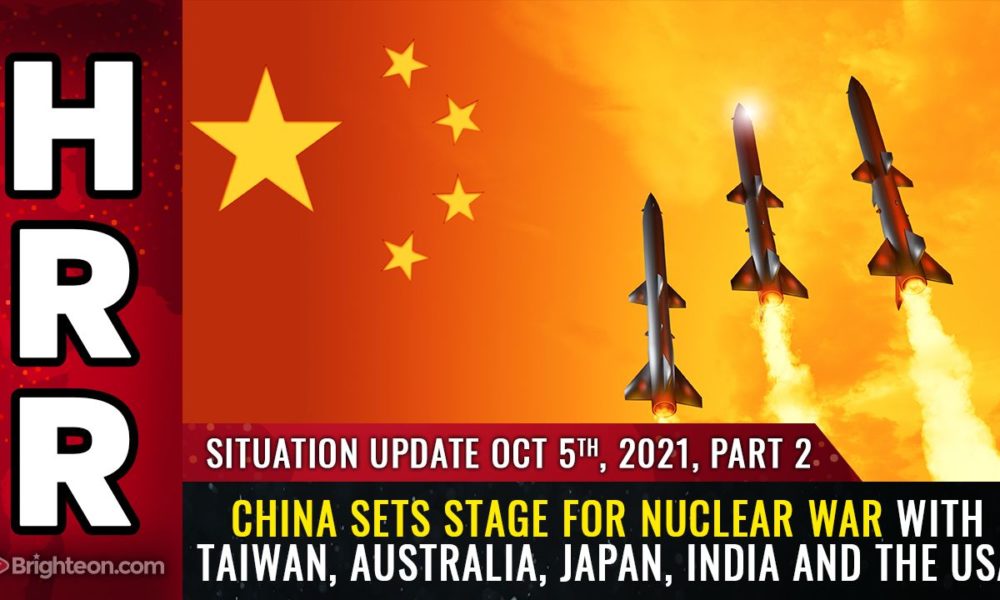 While most Americans remain in a deep state of slumber, global events are moving us a little bit closer to military conflict with each passing day.  U.S. relations with China are rapidly going down the tubes, and this is something that should greatly concern all of us because it has very serious implications for our future.

Personally, this is an issue that I have been focusing on for a very long time.  Many years ago when I worked as an attorney, I would often have conversations about the state of the world with those that I worked with, and when China would come up I would warn that someday the U.S. and China would be bitter adversaries.  At the time, what I was saying didn’t seem to make sense to a lot of people, but I understood where global trends were taking us.  Like most of the things that I write about, I knew that it wouldn’t happen right away, but now we have reached a point where U.S. relations with China are the worst that they have been since the Korean War.

On Monday, there was breaking news about a huge international scandal involving China, but it didn’t get that much coverage from the corporate media.

According to NPR, the Biden administration announced that it is formally blaming the Chinese government for a large scale cyberattack on Microsoft…

The White House is publicly blaming China for an attack on Microsoft’s Exchange email server software that compromised tens of thousands of computers worldwide, allowing hackers to gain access to troves of sensitive data.

Separately, the Department of Justice announced Monday that a federal grand jury in May had indicted Chinese nationals accused of working with official sanction from Beijing to break into computer systems belonging to U.S. companies, universities and governments.

This wasn’t just some random State Department official making speculative comments about who may be responsible.  This is the official position of the White House, and a number of other governments around the world joined the Biden administration in placing the blame on China…

In a coordinated announcement, the White House and governments in Europe and Asia identified China’s Ministry of State Security, the sprawling and secretive civilian intelligence agency, with using “criminal contract hackers” to conduct a range of destabilizing activities around the world for personal profit, including the Microsoft hack.Try This New Invention and You’ll Never Run Out of Clean Drinking Water Again! (VIDEO)

A cyberattack of this magnitude is an act of war, and we are being told that sensitive systems all over the country were compromised…

The cyberattack on Microsoft, which is believed to have begun in January, reportedly injected computers with malware that secretly monitored systems belonging to small businesses, local and state governments and some military contractors.

As part of the attack, an unidentified American company was also hit with a high-dollar ransom demand, according to a senior Biden administration official.

This represents a dramatic escalation by the Chinese, and the Biden administration crossed a major threshold by formally pointing a finger at China.

There is no going back to the days when the U.S. and China were “friends”.  Way too many bridges have been burned, and now an act of war has been committed.DANGER – Shield Your Smart Meter! Protect Your Family from Illuminati Kill Grid!

The good news is that at least we aren’t shooting at one another yet, but that could change.  China has repeatedly threatened to invade Taiwan if independence is declared, and if that happens the U.S. military would get involved.

Many Americans can’t even find Taiwan on a blank map of the world, but the truth is that it could easily spark a major military conflict.  If you don’t want to take my word for it, just consider what some national security experts are saying…

A clear and troubling consensus has emerged in the American national security community that the Taiwan Strait is the most likely place for a major war to erupt between the United States and China; that it might start soon, and that such a conflict might quickly escalate into a nuclear confrontation.

In March, the leading foreign policy organization in the United States, the Council on Foreign Relations in New York, issued a report concluding that Taiwan has become “the most dangerous flashpoint in the world.” There, a unique and troubling set of geopolitical developments have conspired to make a shooting war between the People’s Republic of China and the United States more likely than ever before. Recently the newly appointed commander of U.S. forces in the Indo-Pacific Region, Admiral John Aquilino, remarked that a possible invasion of Taiwan by the People’s Republic of China (PRC) “is much closer than we think.”

For such a long time I have been warning that this was coming, and now it is becoming a reality.Ancient Japanese Tonic Melts 54 LBS Of Fat. Hint: Drink Daily Before 10:00 AM

Recently, the Japanese government also publicly warned that the Chinese could soon invade Taiwan, and the Chinese responded very angrily.  In fact, a video channel that has “close ties to the People’s Liberation Army” released a video which had such harsh words for Japan that it made headlines all over the globe…

“When we liberate Taiwan, if Japan dares to intervene by force – even if it only deploys one soldier, one plane or one ship – we will not only return fire but also wage full-scale war against Japan itself.”

Can you imagine the uproar that would happen if the Biden administration said something like that?

In the video, Japan was also threatened with nuclear war…

“We will do this until Japan declares unconditional surrender for the second time.”

The video has now been taken down, but it should be unthinkable to say such things.

Unfortunately, these are the times in which we live.

Here in the United States, members of Congress from both parties are trying to get increasingly tough on China, and Chinese ownership of U.S. farmland is of particular concern…

The push to drain China’s influence from the U.S. economy has reached America’s farm country, as congressional lawmakers from both parties are looking at measures to crack down on foreign purchases of prime agricultural real estate.Hydrogen Water & Ionized Water w/Silver Particles, Research for Your Immune System – 2021 the Year of Alternative Medicine

In recent years, the Chinese have been buying up thousands upon thousands of acres of prime farmland, and their holdings are now valued at approximately 1.9 billion dollars…

Chinese firms have expanded their presence in American agriculture over the last decade by snapping up farmland and purchasing major agribusinesses, like pork processing giant Smithfield Foods. By the start of 2020, Chinese owners controlled about 192,000 agricultural acres in the U.S., worth $1.9 billion, including land used for farming, ranching and forestry, according to the Agriculture Department.

Hopefully Congress will step up and do something.

Of course if that happens, the Chinese government will almost certainly retaliate against U.S. companies in China.Protection Against Toxic EMF Damage – Smart Meter Covers

Most Americans simply do not understand how bad things have gotten.  Our relations with China have been deteriorating for years, and now we have officially reached a crisis point.

Unfortunately, it appears that relations between our two nations will continue to fall apart in the months ahead, and at this point everyone should be able to see where all of this is eventually leading.

As always, let us hope for the best, but let us also get prepared for the worst.

To many people, any sort of open conflict between the U.S. and China is absolutely unthinkable, because the consequences of such a conflict would be too horrific for words.