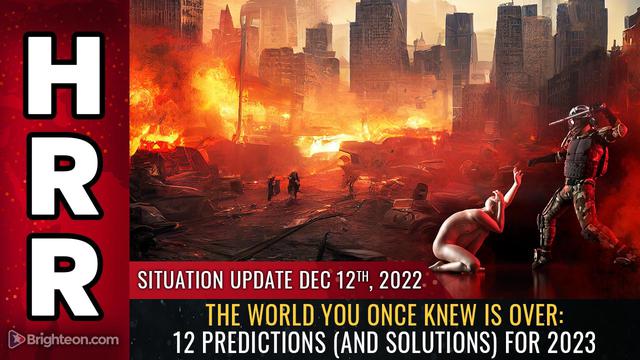 Today’s Situation Update podcast (see below) covers 12 predictions and solutions for 2023. If you hope to navigate the coming year, you’ll want to keep these predictions in mind because they affect everything: Food availability, energy, money and finance, jobs, free speech and more.

The 12 predictions are summarized below. The overall theme is that global governments will accelerate tyranny and infrastructure destruction while the people of the world continue to get red pilled. As they awaken to the truth about global depopulation and genocide against humanity, they will push back more aggressively against tyranny. As this takes place, alternative systems of money, communications, medicine and technology will flourish.

1) Vax deaths accelerate as immune system destruction continues, thanks to “booster” shots (follow-up vaccine-assisted suicide).  and anyone uninformed enough to keep jabbing their bodies with mRNA bioweapons. One expert recently testified before the U.S. Senate, sharing insurance statistics that reveal a 26% increase in mortality following covid-19 “vaccines.” That expert is Josh Stirling. As LifeSiteNews reports:

2) Exploding infertility and stillbirths – This is of course due to the spike protein bioweapons being produced in the bodies of pregnant moms after they are jabbed. The spike protein is incompatible with viable gestation. High vaccine-compliance countries like Taiwan are already experiencing shocking reductions in live births. Depopulation is here. As Dr. Janci Lindsay recently warned during a roundtable discussion organized by U.S. Sen. Ron Johnson, covid jabs might, “sterilize an entire generation.” That process has already begun.

3) Deindustrialization of Europe – BASF has now announced it is shuttering operations across Europe, “as quickly as possible, and also permanently,” reports the Financial Times via AmericanExperiment.org. This means BASF is leaving Europe and permanently shuttering operations there. They’re setting up new operations in China, under the control of the CCP which will then be able to dictate which countries around the world are able to purchase the more than 45,000 industrial chemicals (including ammonia, used to make nitrogen-based fertilizers) manufactured by BASF. This is the end of industrialized Europe. The continent will now see the sharp plummeting of GDP, population, exports, industrial output and more. Expect millions to lose their jobs in 2023.

4) Crop failures / worsening food scarcity – Global fertilizer production is off by an estimated 40%. Crop yields are already suffering due to water vapor in the atmosphere caused by the Tonga volcanic explosion in January, which thrust water vapor into the mesosphere (well above the stratosphere). This water vapor reflects sunlight, reducing the amount of light reaching the crops on the surface of the Earth, while also cooling the globe. Right now, crop yields in the Southern hemisphere are substantially impacted by this phenomenon, with some regions reporting up to 50% reduction in crop yields (other regions are reporting less severe reductions such as 20%). Reducing sunlight — even a little — shortens growing seasons and reduces crop yields. This, combined with global fertilizer scarcity, means crops in 2023 and for several years thereafter will experience severe drops in yields, leading to global food scarcity and food inflation.

5) Inflation and bailouts / zombie stimulus – As the zombie economy continues to fail, governments will resort to fiscal stimulus to try to prop up the appearance of a functioning economic ecosystem. Despite the deflationary impacts of depopulation and engineered demand destruction, inflation will substantially worsen in 2023, and I predict that some foods will double in price over the next year. Watch for governments to find new excuses to pump money into the failing system: Pension bailouts, slave reparations payments, tax refunds and other stimulus vectors. In reality, millions of American workers will lose their jobs in 2023 as consumer demand plummets and an economic depression — far beyond a recession — takes hold.

6) Banking restrictions on withdrawals of cash – This is already taking place in Nigeria, where bank customers are limited to withdrawals of just $45 a day of their own money. As more governments and central banks push hard into digital currencies, watch for them to make dealing with cash and banks more and more painful, if not at some point impossible. We anticipate bank freezes, bail-ins and insolvency failures beginning in 2023 and continuing for years to come.

7) Digital money rolling out – As Breitbart.com now reports, the UK government is pushing hard to launch a “Digital Pound” CBDC which would of course surveil every transaction by private citizens while allowing the government to restrict purchases or freeze wallets on command:

The de facto head of His Majesty’s Treasury announced this week that the Bank of England has begun consultations on implementing a Central Bank Digital Currency (CBDC) that could usher in the globalist vision of a cashless society in which all transactions are traceable by the government.

They push for digital currencies will be aggressive, but globalists will likely be disappointed as the vast majority of consumers reject “surveillance money” and continue to demand the anonymity that comes with cash.

8) A new pandemic, worse than covid, with forced quarantines and vaccines under the new WHO treaty – This next pandemic is already being planned for 2023. As NewsPunch.com reports, “Bill Gates Is Planning ‘Catastrophic Contagion’ That Kills Children and Young Adults.” That article references Mr. Gates’ planning of a second “catastrophic contagion” that is said to be worse than covid. It’s clear that globalists need another, more aggressive pandemic — combined with the new WHO pandemic treaty (see my recent interview with Dr. Francis Boyle here) — to force world populations into lockdowns, quarantines, masks and yet more vaccines.

9) Worldwide CLIMATE lockdowns and engineered fuel scarcity – The global controllers are on the verge of declaring “climate lockdowns” in 2023 (and years beyond) as the latest excuse to devastate economic productivity and farming. Watch for yet more government dismantling of fossil fuel infrastructure, fuel supply scarcity and forced limits on vehicular travel in European cities and states. The World Economic Forum, for example, has just openly called for ending private vehicle ownership across the planet. The effort to fully roll out climate lockdowns will take a decade or more, but it will begin in 2023 with pilot programs that are designed to test the public’s compliance. (See Climate.news to stay up to date on the war on human activity being waged in the name of “climate science.”)

10) Populist revolts against corrupt governments and rigged elections – We are already seeing a revolt in Brazil, where the corrupt Lula regime and communist traitors in Brazil’s Supreme Court are widely accused of election rigging and covering up the evidence of such. Similarly, a strong pushback against election meddling is taking place in Arizona, too, and the American people are increasingly realizing their elections are rigged — and have been rigged — beyond the point of being able to out-vote the cheating. As food inflation worsens, joblessness increases and political frustration rises, we will witness a sharp increase in populist revolts across the western world.

11) Huge pushback against censorship by tech platforms, plus rising success of alt platforms – In the wake of the release of the damning Twitter Files, media analyst Jonathan Turley is pointing out that Jack Dorsey may be facing a criminal indictment for lying to Congress about Twitter’s ongoing shadowbanning and viewpoint discrimination:

In September 2018, Dorsey testified under oath and denied what these files appear to now confirm. Rep. Mike Doyle, D., Pa., asked, “Social media is being rigged to censor conservatives. Is that true of Twitter?”

Doyle then asked “Are you censoring people?”

It now appears that the entire company was operating as a censoring department… That group reportedly included Vijaya Gadde, head of Legal, Policy and Trust; Yoel Roth, the global head of Trust and Safety; CEOs Jack Dorsey and Parag Agrawal, and others.

Beginning in 2023, expect the U.S. House to launch a series of investigations in Big Tech platforms and their malicious, politically-motivated censorship and election meddling, including Facebook, Google, YouTube, Linked In and others.

Another important trend not included in this list is the escalation of war with Russia, which the Pentagon and U.S. weapons manufacturers are aggressively pushing. This will not end well for Europe, and it seems that the USA is willing to sacrifice not just Ukraine but also Western Europe as a whole in its quest to defeat Russia. The plan isn’t working very well, as evidenced by the recent “oil price cap” fiasco that’s already turning out to be a poorly considered scheme which will only reduce oil supplies to western nations. In America, diesel shortages and jet fuel shortages are now a reality, with Orlando International Airport declaring a jet fuel emergency just yesterday.

I cover all these and more in today’s Situation Update podcast:

– Vaccine deaths accelerate, with 26%+ excess mortality and rising
– Live births falling in high-vax nations as babies aren’t surviving gestation
– BASF announces PERMANENT shut down of European operations
– Deindustrialization of Europe will accelerate; collapse now unstoppable
– Crop failures and food scarcity to worsen significantly in 2023
– Global push for digital money, CBDCs – financial tyranny on steroids
– Globalists will crash fiat currency and food supply, then pose as saviors
– Global populist revolts against government corruption and tyranny
– Blackrock warns central banks cannot stop the coming market implosion
– The era of easy money and easy stock gains is OVER
– Either path chosen by Central Banks leads to CATASTROPHE
– Humanity to lose between 1 – 4 billion people by 2033
– mRNA jab warning – they may “sterilize an entire generation” #depopulation
– You can survive it all, with knowledge and preparedness
– Interview with Goldback founder, physical currency infused with atomic gold