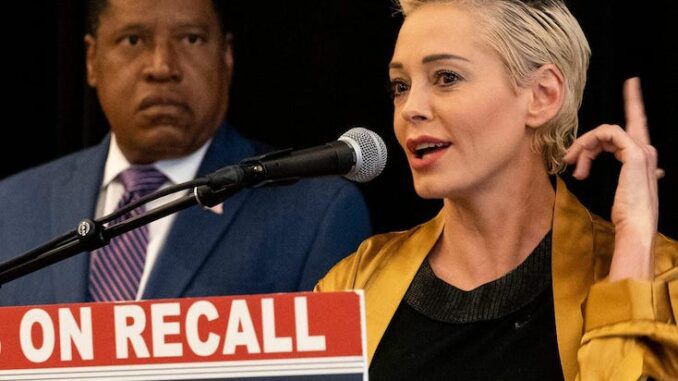 Hollywood actress and #MeToo activies Rose McGowan has officially endorced Larry Elder for California governor while claiming that Gavin Newsom’s wife tried to bribe her into staying silent about pedophile rapist Harvey Weinstein. In an explosive speech in Los Angeles on Sunday, McGowan detailed how Newsom’s wife, Jennifer Siebel Newsom, phoned her up in 2017 on behalf […]

In an explosive speech in Los Angeles on Sunday, McGowan detailed how Newsom’s wife, Jennifer Siebel Newsom, phoned her up in 2017 on behalf of former Harvey Weinstein attorney David Boies to ask, “what it would take to make” her happy enough to cover-up Weinstein rampant rape and pedophilia. The phone call took place six months prior to the New York Times launching its bombshell report against Weinstein.

“When I finally got on the phone with Jennifer Siebel Newsom for what I assume was about movie projects, imagine my surprise when she says, ‘what can Boies Schiller [law firm] do to make you happy?’” McGowan told the crowd.

“Again, I had no idea who that was, so I just said nothing and hung up on her. That was my last contact with her,” she added.

Breitbart.com reports: Weinstein’s former lawyer David Boies was later fired by the New York Times after he was alleged to have helped Weinstein hire the private spy companies Black Cube and Kroll to monitor his accusers.

McGowan further recalled how Newsom’s wife allegedly pretended to be a rape victim of Harvey Weinstein’s to gain access to a “private email group of Weinstein rape victims.” Last week, a spokesperson for Jennifer Siebel Newsom publicly denied the allegations:

What is being alleged is a complete fabrication. It’s disappointing but not surprising to see political opponents launch these false attacks just days before the election. Their limited correspondence has been strictly as fellow survivors of sexual assault and in Jennifer’s former capacity leading the Representation Project, an organization that fights limiting gender stereotypes and norms.

During her speech on Sunday, the Scream actress called out the Democratic Party as a whole, referring to the party as a “cult” that brainwashes people into voting for them.

“This is not a country or a state for everyone. This is a country for the few,” McGowan said. “I really wish I had better news. It gives me no pleasure to be the bearer of truth, but the truth is sometimes ugly.”

“Why not change?” she later asserted. “Why not go big? Why not put a stake in the heart of evil? Because that’s what this really is. This is good and this is evil.”

McGowan concluded her speech by officially endorsing Larry Elder, arguing that he will passionately fight for the betterment of California while shaking the state’s political establishment at its very core.

“My money’s on Elder,” she concluded, “I really appreciate anybody watching or reading this to think differently. To be brave. Do something that’s weird. Like maybe voting Republican, even though it will feel strange.”