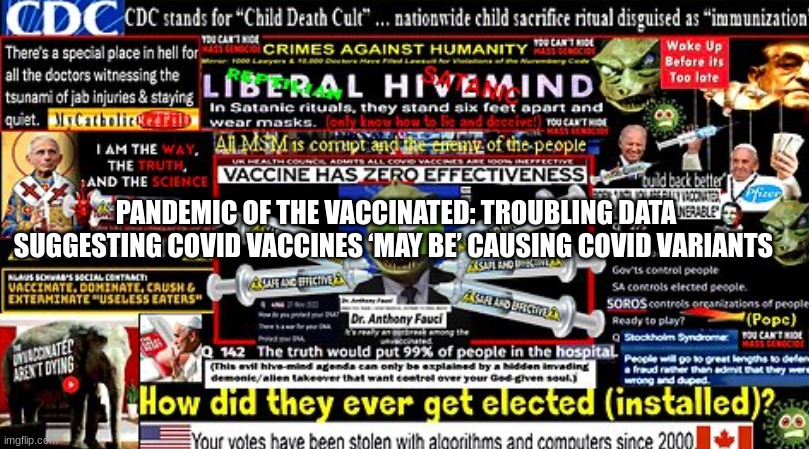 The Gateway Pundit has been reporting for years that these experimental vaccines are not safe and effective. Now, controlled corporate media finally starting to ask real questions about these shots.

A recent article published in the Wall Street Journal suggested that the Covid outbreak heavily affected most vaccinated people. More and more research points to the possibility that repeated vaccinations make people more vulnerable to XBB and contribute to the rapid evolution of the virus.

It can be recalled that the Centers for Disease Control and Prevention (CDC) announced it is monitoring a new COVID-19 variant known as “XBB,” which is responsible for all new infections in the United States.

Back in October, health officials in the US said they were tracking a new Covid strain that is being called the “most vaccine-resistant ever” after causing a surge in cases in Singapore.

The recent outbreak of infections in Singapore has been traced to XBB, a “recombinant” of the Omicron subvariants BA.2.10.1 and BA.2.75.

“Preliminary research suggests the Omicron subvariant XBB might carry a higher infection risk and be more resistant to neutralizing antibodies from booster vaccine doses and antibody drugs, but more studies are needed, according to Verywell Health.

On Sunday, Allysia Finley wrote an opinion piece asking the real question, “Are Vaccines Fueling New Covid Variants?”
According to Finley, “it isn’t clear that XBB is any more lethal than other variants, but its mutations enable it to evade antibodies from prior infection and vaccines and existing monoclonal antibody treatments.”

“Such rapid and simultaneous emergence of multiple variants with enormous growth advantages is unprecedented,” a Dec. 19 study in the journal Nature notes. Under selective evolutionary pressures, the virus appears to have developed mutations that enable it to transmit more easily and escape antibodies elicited by vaccines and prior infection.

The same study posits that immune imprinting may be contributing to the viral evolution. Vaccines do a good job of training the immune system to remember and knock out the original Wuhan variant. But when new and markedly different strains come along, the immune system responds less effectively.

Similarly, a study this month in the journal Cell found that antibody levels of people who had received four shots were 145 times as high against the original Wuhan strain as the XBB variant. A bivalent booster only slightly increased antibodies against XBB. Experts nevertheless claim that boosters improve protection against XBB. That’s disinformation, to use their favored term.

Two years ago, vaccines were helpful in reducing severe illness, particularly among the elderly and those with health risks like diabetes and obesity. But experts refuse to concede that boosters have yielded diminishing benefits and may even have made individuals and the population as a whole more vulnerable to new variants like XBB.
Finley added that most states and countries affected by the new COVID variants have the highest vaccination and booster rates.

It might not be a coincidence that XBB surged this fall in Singapore, which has among the highest vaccination and booster rates in the world. Over the past several weeks a XBB strain has become predominant in New York, New Jersey, Connecticut and Massachusetts, making up about three-quarters of virus samples that have been genetically sequenced. The variant has been slower to take off in other regions, making up only 6% of the Midwest and about 20% in the South. The Northeast is also the most vaccinated and boosted region in the country.
Hospitalizations in the Northeast have risen too, but primarily among those over 70. One reason may be that the T-Cell response—the cavalry riding behind the front-line antibodies—is weaker in older people. The virus can’t evade T-Cells elicited by vaccines and infections as easily as it can antibodies. Because of T-Cells, younger people are still well-protected against new variants.
In case you’ve forgotten, serial liars Anthony Fauci and Joe Biden once claimed, “This is a pandemic of the unvaccinated.”
Anthony Fauci said in 2021 that unvaccinated people could ‘pose a threat to the country’s progress on the COVID-19 pandemic.’ He said Covid-19 is now an “outbreak among the unvaccinated.”