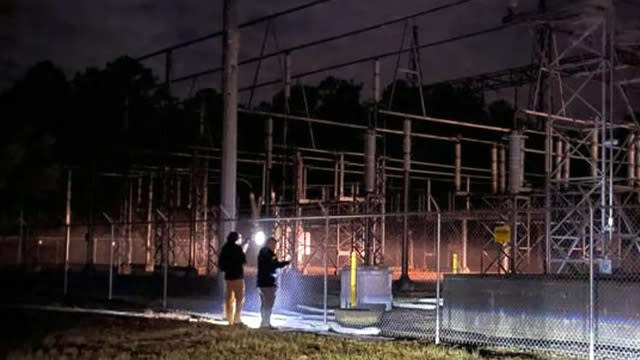 Residents of Moore County, North Carolina, cried “Martial Law” Sunday evening after county officials issued an Emergency Declaration Order in response to widespread power outages and mandated a dusk-to-dawn curfew for the duration of the order.

Police said unknown gunmen fired on two electricity substations, and the damage plunged 40,000 homes into darkness. Sheriff Ronnie Fields said the shootings were unlike anything he had seen in his 40 years of law enforcement. They were “targeted” attacks, he said, carried out by an individual or individuals who “knew exactly what they were doing.” The curfew, he added, was meant to safeguard civilian lives.

Residents of the Republican-dominated county, however, are having mixed feelings about the curfew, with some accusing local leaders of exaggerating the problem and forcing residents to abide Martial Law.

Forty-five-year-old Richard Jarrett, a security guard, was walking home from his job when a police cruiser with lights flashing and sirens blasting pulled alongside him. Two cops started interrogating him, asking why he violated curfew.

“I told them I just got off work and was heading home. I live a half-mile from my job; it’s easier to walk then drive. Them cops said it was piss poor excuse. Bastards said they could take me to jail. When I asked if I was being detained or free to leave, they said they were investigating me, kept me there 20 minutes running my I.D. I’m a hardworking Christian. I ain’t no criminal. They let me go, but had no good reason to stop me,” Mr. Jarrett told Real Raw News.

Elsewhere in Moore County, 26-year-old Janet Pike, a stay-at-home mom, was outside past curfew with the family dog when cops pulled into her driveway.

“I knew about the curfew but was on the curb, 15 feet from the front door. I explained I was only going to be out long enough for Baron [the dog] to do his business. He snarled as they got out of the car, so they demanded I put him inside and come back outside so they could talk to me. So, I asked if I could just stay inside and let this ordeal end, and they said no because they hadn’t established my identity,” Mrs. Pike said.

Mrs. Pike, who describes herself as a law-abiding citizen, obeyed police instructions.

“Then they checked my license and said I was breaking the law,” she said. “They said they were doing me a favor by only giving me a citation. This is overreach, this is Martial Law. I was out there with them, against my will, in my bathrobe and slippers for 15 minutes before told I could leave. If my husband was home, it could have gone another way.”

Real Raw News has reached out to both the Moore County Sheriff’s Office and Moore County Congressman Richard Hudson. We will update this story if we receive a response.