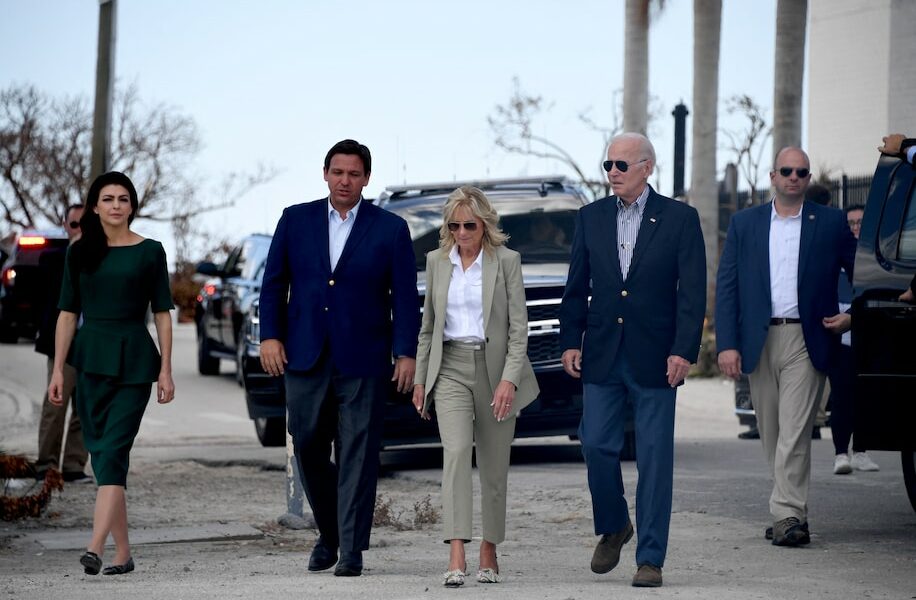 The two met in Florida Wednesday afternoon and toured the now dilapidated city of Fort Meyers, where raging floodwaters had swamped streets and homes and created a festering swill of putrid pestilence. Residents in the hardest hit areas are still clamoring for food, potable water, and electricity.

DeSantis and Biden—who have sparred over illegal immigration and Covid protocols—seemed to set politics aside as they surveyed the debris and muck, but when DeSantis offered a handshake as a sign of unity and solidarity, alarm bells sounded at military installations helmed by White Hat officers. At Fort Gordon, Georgia, home to U.S. Army Cyber Command, Maj. Gen. Neil S. Hersey quipped, “What the hell does he [DeSantis] think he’s doing?” and at MCB Camp Pendleton, Brigadier General Jason Woodworth said a gesture of friendship, even if farcical, was sending the wrong message to constitutionalists working feverishly to restore order to the Republic.

DeSantis’ most vociferous critics were two officers who until recently had staunchly endorsed him. Even last week U.S. Army Major Gen. Richard E. Angle and Col. J.D. Keirsey were praising DeSantis’ leadership and saying that he, not President Trump, should be the Republican nominee in the 2024 presidential election. But their shining opinion of DeSantis soured after the governor refused to publicly acknowledge and condemn the Federal Emergency Management Agency’s misdeeds in the Sunshine State.

By the time Biden and DeSantis finished shaking hands, Angle and Keirsey were on the phone with Gen. Berger and using words like “traitor,” “turncoat,” “enemy,” “Deep State,” “sell out,” and “sonofabitch” to express their newfound displeasure. They ranted in the general’s ear for seven minutes, a source in is office told RRN, before Gen. Berger with measured calm tried to deescalate the heated rhetoric.

“I don’t like this any more than you do, but DeSantis had to fall on his sword,” Gen. Berger said. “His back was against the wall; he needs federal money. What would you do in his shoes? It’s not Biden’s money, it’s the American taxpayers. I have issues with DeSantis, but on this he gets a pass.”

Still, Gen. Angle and Col. Keirsey engaged in a bit of reckless speculation: What if DeSantis promised to soften his stance on illegal immigration in exchange for cash? What if he pledged to stop shipping illegals to sanctuary cities? What if he switches sides? There were a lot of what ifs.

General Berger, our source said, finally shut down the conversation, saying he would not entertain baseless, hypothetical arguments.

“I’ll contact DeSantis and find out,” the general told Angle and Keirsey.