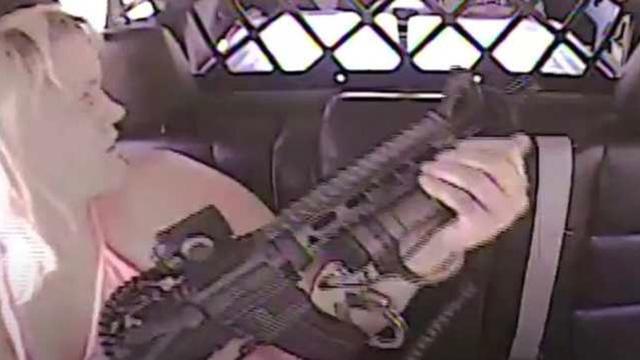 GRADY COUNTY, Okla. — An Oklahoma woman who was being detained in the back of a police car is accused of slipping out of her handcuffs, grabbing an assault rifle and opening fire – and the wild incident was all caught on video.

According to deputies, the woman, identified as 36-year-old Rachel Zion Clay, was only being detained for erratic behavior and wasn’t going to get arrested. “While in the back seat of a patrol car, she was able to get her wrist free from the handcuffs and the handcuffs were put on properly,” said Grady County Undersheriff Gary Boggess, (say what?) who spoke with KOKH-TV about the incident. Boggess said the woman was able to reach into the patrol car’s console and grab a rifle. “There’s several switches, one is a gun switch to unlock the gun lock and she found it, unlocked the gun lock, and was able to retrieve an AR-15 rifle,” said Boggess. “Then she was able to figure out how to put a round in it, put it on fire and she fired approximately 10 rounds at our deputies and a civilian.”

In footage from the police car’s dashcam, the woman is seen holding the rifle and shooting it through the back window. Clay barricaded herself in the car and surrendered more than three hours later. Authorities say she tested positive for methamphetamine. (And the deputy tested positive for dumb ass)

Both the officer and civilians sustained non-life threatening injuries and have since been released from the hospital, according to authorities. Boggess said his office is now making changes to protocols in an effort to keep his deputies safe. (Seriously?)

“One, I will say, is our console where it actually said ‘gun,’” he said. “She was able to see that. That’s going to be replaced. We’re going to put a switch someplace else in the vehicle to lock our gun. It’s a freak deal. It’s one of these … I’m not going to say one in a million, but you know, it’s one of those deals that, you know, once it happens…(well said…not)