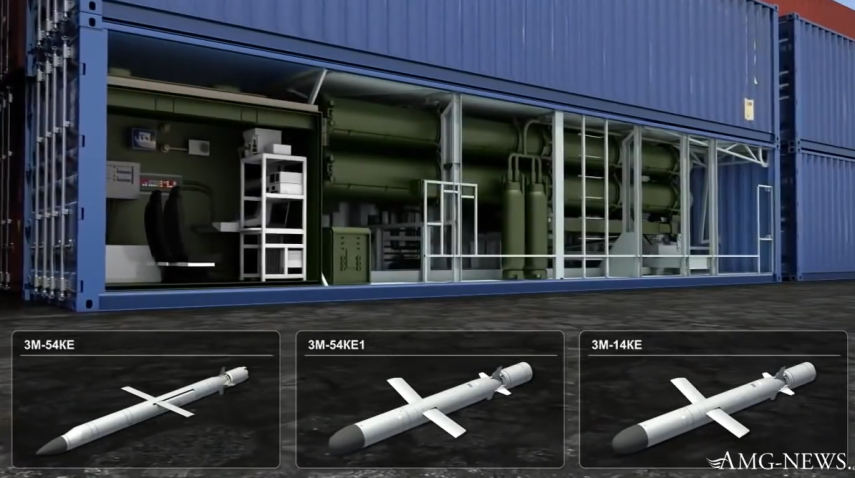 This unique capability introduced by the Russian 3R-54 ‘Club’ cruise missile manufacturer ‘AGAT’ features a containerized version of the cruise missile. The system, designated Club K, enables the deployment and launch of four cruise missiles per container, carried and operated from ‘innocent looking’ cargo ships, rail cars or trucks. The system comprises the launch container, mission planning and control module (in another container) and optional UAV carried in a third module.

Think about it for a minute…

SOUTHERN BORDER
Over run with millions of foreign nationals. Uncontrollable situation. Optically it is an invasion.

Foreign shipping container ships in full on blockade. Could be armed.

US CAPITOL
Fenced off. Locked down and looks like it’s shut down.

WHITE HOUSE
Staged and faked for the news media. Obviously a FAKE INSTALLED POTUS who is a known sell out. What are they doing besides destroying the country?

MILITARY
Being dismantled by the mandates. 1/3 of service members being discharged over mandates. National Guard staged to take over in infrastructure positions.

INFRASTRUCTURE = FIRE, POLICE, HEALTH WORKERS, SCHOOLS, TRAVEL
All being dismantled by the mandates. Resignations in the MILLIONS.

SUPPLY CHAIN
Currently being demolished. This is a strategic action in WAR.

What if this is all much further than we think and the elements of this are part of warfare the public is unable to recognize.

What if the US gov has already surrendered to the global elite and what we are seeing is the terms of that surrender being implemented.

All of these things combined are adding up to something. The geopolitical landscape is changing so fast the world order can not keep up.

Has the USA fallen already?

Majority are from Asia (china). Over half a million containers now. Some could absolutely be armed.

This is a Silent War, but a war nonetheless.

Only a matter of time before it goes kinetic. Many people are now seeing it for the first time. Xi made a choice, as did the CCP. The evil is making it’s final move, life or death coming.

It’s like all the elements of war (besides kinetic) exist and are taking place. I’m looking at all of it and wondering if its much further along than any of us think.

When they let the Chinese buy into our country. The Chinese used their monetary influence to destroy use and our ideals. They have influenced our elections, our economy, our schools, our media and our freedom. It is now time to if it isn’t to late to attack these red communist pieces of SH*T! The World needs to take them out!

On top of it all the US GOV is filled with traitors and agent provocateurs. The entire GOV. Every branch, every agency.

We have known for a long time missile systems are built into containers. Currently it would be impossible to detect among the 500,000 containers floating on our coasts.

They wouldn’t need to hold troops and could be remotely controlled. IF there are armed containers on our coastlines then we are finished. You could take every city in the US out in moments.

There would be no time to retaliate.

Is this why the gov is dismantling the country? Is this what they are being instructed to do?

The insane push to mandate the experimental death jab is not only out of control but the ultimate distraction.

The entire population is focused on this issue when so many other things are happening behind the curtain.

Its literally an absurdity to force this on the population when you look at the current data on the bio weapon.

Are we in the FOG OF WAR?

The Biden regime is dismantling the American system, the economy, our fuel supplies, our food supplies, our defense, our borders and now they are forcing a deadly vax on us. Nothing good is coming from DC. NOTHING!

Question: If the ultra liberals have total control of the nation why are they pushing so hard to mandate a vax and pass laws to control the people?!?

Answer: They are afraid of the people rising up against them and they know their time is limited. They have a guilty conscience on what they are doing which is unconstitutional. They are running scared and doing everything they can to stop the awakening of the people so they can make a final grab of power – before the people wake up. Their actions reveal their weakness and desperation.

The tipping point of the patriots being ready to defend this nation has been reached. The vax mandate was the redline the people would not accept. This false government declared war on the people, already have killed thousands and they are hungry for more. Those that have harmed and killed the innocent have forfeited their right to govern and to exist.

The vax mandate is clearly unconstitutional and the people have the right to defend their life, liberty and nation. Those that oppose that defense are enemies of this nation. We are the defenders, they are the usurpers and tyrants.

If the illegitimate government tries to send troops and police after those that reject the vax, the law enforcement personnel will have a final choice to make. As I see it, there is more of us then them, and the police and military will stand down and refuse illegal orders. The police and the military will not fire against their relatives and friends. Period. If they do, they have gone rogue and are in league with un American tyrants that are hell bent on destroying this nation. If they make the wrong choice, history will judge them as siding with the enemies of this nation and will be treated as such.