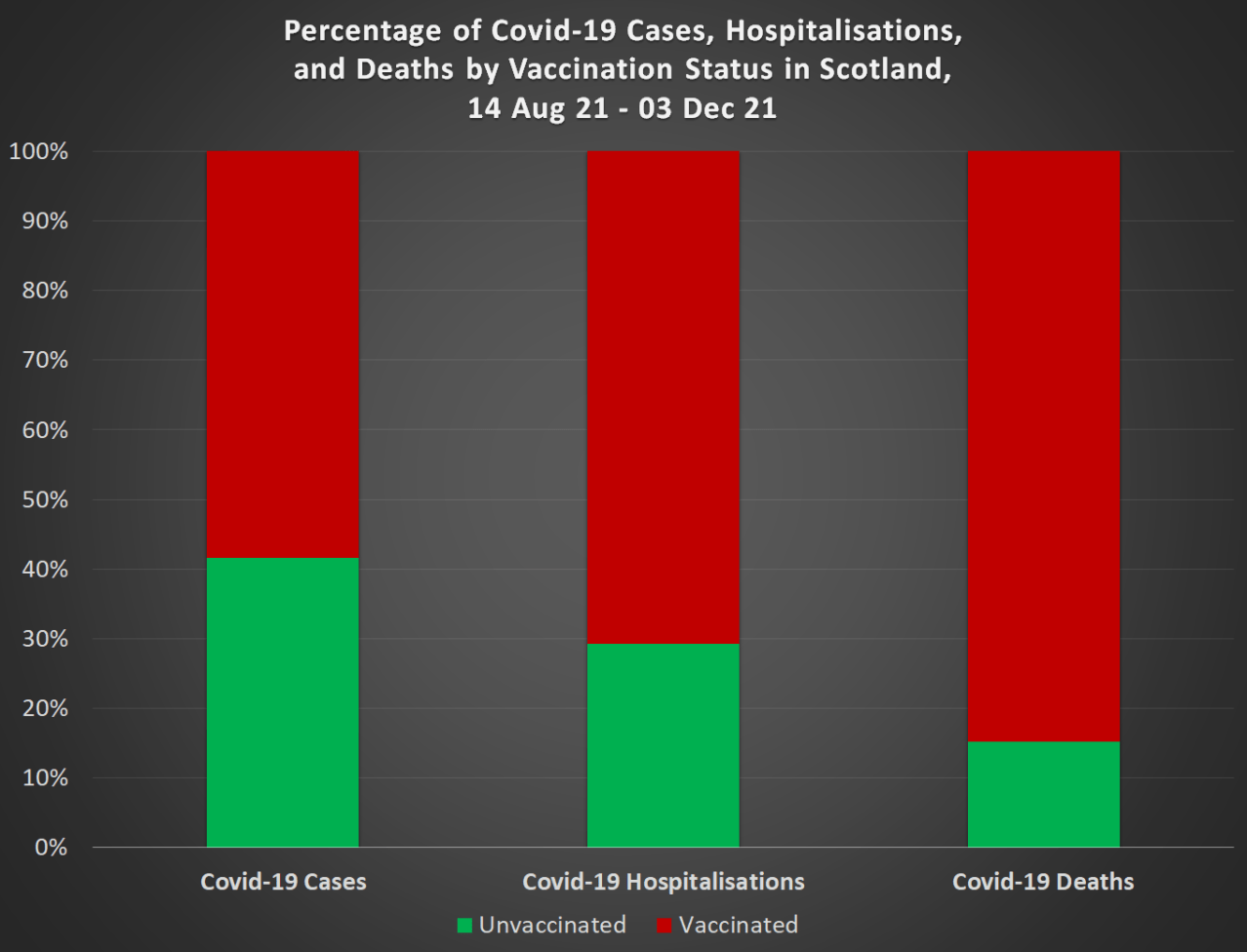 If someone had said to you in 2019, that in the near future the mainstream headlines will be dominated for days on end with news that the UK Government held a Christmas party, then you would have most likely thought they were rather odd. But here we are. However, whilst the mainstream media has got you talking about who got what in the ‘Secret Santa’ that took place in 10 Downing Street in December 2020, they’ve managed to distract you from the fact that the UK Government is slowly boiling the nation once again by drip feeding restrictions back into play, week by week, in response to an alleged new variant that is yet to claim a single soul. The United Kingdom will end up back in lockdown without anyone even realising it has happened.

Public Health Scotland (PHS) publish a weekly report containing statistics on Covid-19 cases, hospitalisations, and deaths by vaccination status, the latest of which was published on Wednesday 8th December, containing data on cases and hospitalisations between 6th Nov. 21 and 3rd Dec. 21, and data on deaths between 30th Oct. 21 and 26th Nov. 21.

But this isn’t a new phenomona that is suddenly occurring because of the overhyped Omicron variant. Dr Hilary may tell you that 90% of the people in hospital with Covid-19 are unvaccinated whilst he admires his own reflection in the camera lens on the Lorraine Kelly show on ITV.

But Dr Hilary is liar, because the official data shows that the fully vaccinated have accounted for the vast majority of cases, hospitalisations, and deaths for months on end, and we can prove it to you…

We’ve compiled the following analysis using offical data contained within Public Health Scotland Covid-19 Statistical Reports from the latest release published December 8th, all the way back to the edition published August 18th, and they can all be found here. The chart shows that in August and early September, the unvaccinated population accounted for the majority of Covid-19 cases.

This data alone puts an end to the myth that it is selfish to not be vaccinated, because it’s quite clear the jabs do not prevent infection or transmission. Which begs the question as to why Scotland has introduced Vaccine Passports, and why Boris Johnson is about to introduce them in England. The above chart shows the cumulative number of cases by vaccination status between 14 Aug 21 and 03 Dec 21, and illustrates quite clearly that the fully vaccinated have accounted for the majority of cases since August.

What we can see from the above is that up to the week beginning 9th Oct, the unvaccinated had accounted for the majority of cases, however since this week there has been a switch with the fully vaccinated taking the lead and hitting 181,580 confirmed cases by Dec 3rd.

Whilst the number of cases among the unvaccinated population during this period of 16 weeks has amounted to 156,282, despite this group containing children who are ineligible for vaccination and have accounted for a huge chunk of cases since the start of the alleged pandemic. Now, we couldn’t quite believe our eyes when we saw that official data shows the vaccinated population have accounted for 7 in every 10 hospitalisations since August 2021. Because Dr Hilary, who has absolutely no conflicts of interest whatsoever (despite recently releasing a book about a pandemic, and being a company director of Medtate which collaborates with a certain Mr Bill Gates), said on national television that “90% of the people in hospital with Covid-19 are unvaccinated”.

Well, looks like that’s the last time we rely on obtaining reliable information from a TV doctor who said in June 2021 that “As a doctor, I have to ask the question, is a holiday really important and essential in a global pandemic? It really isn’t. It’s a luxury. It’s something that you can do without in order to preserve life.”

But then said the following only a few days later once the media had cottoned on to the fact he would be going on a cruise later this year:

“Later this year I am joining a domestic cruise in British waters which remains at sea throughout and does not call at any UK port let alone one abroad. It leaves from Southampton and returns there without stopping.”

But hey-ho. You live and learn. The above chart shows the cumulative number of hospitalisations by vaccination status between 14 Aug 21 and 03 Dec 21, and shows just how bad things have actually been for the vaccinated population compared to the unvaccinated. The above chart proves that the vaccinated population have accounted for the majority of Covid-19 deaths every single week since the beginning of August 2021, with things really taking a turn for the worst in September 2021. The above chart shows the cumulative number of deaths by vaccination status between 07 Aug 21 and 26 Nov 21, and illustrates quite clearly that this is very much a pandemic of the fully vaccinated.

Are the Vaccines Working?

The official data shows that the vaccinated population have accounted for 58% of cases, 71% of hospitalisations, and 85% of deaths over the past 16 weeks. It’s quite clear that the jabs do not prevent infection or transmission, but they are alleged to reduce the risk of hospitalisation and death. However, if this were the case then should we not be seeing a graph that looks more like this? So why aren’t we?

Well, the data suggests that the vaccines are actually making the recipients worse once exposed to the alleged Covid-19 virus. We only need to look at case fatality rates to see that.

Dr. Lee Merritt: In Animal Studies, After Being Injected With mRNA Technology, ALL Animals Died Upon Reinfection.

So now that you know that the double / tripple jabbed population have accounted for 6 in every 10 cases, 7 in every 10 hospitalisations, and 9 in every 10 Deaths over the past 4 months, and that the UK Government has been laughing at you since at least Christmas 2020, are you going to allow them to take away your freedom yet again in response to alleged variant that has so far caused zero fatalities, or are you going to stand up, carry on living, and say “no” this time around?

Because this will not end until we all say it does.