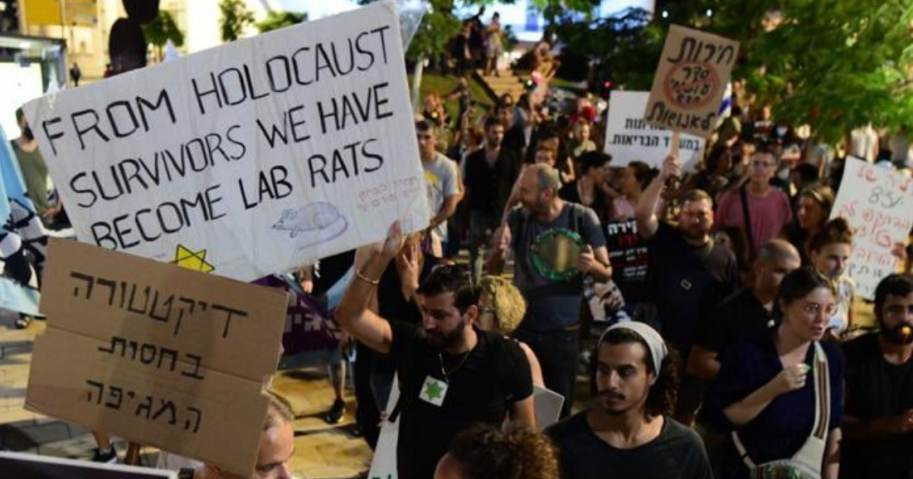 At the end of last month, Israeli Health Officials announced that any individual who has not received a 3rd Jab within 6 months of their second dose would no longer be considered “fully vaccinated” under the countries vaccine passport system.

There have even been rumblings of a 4th mandatory shot that could be right around the corner. People who do not get the booster will be back at square one, no longer having access to everyday activities – just like those who never took the jab in the first place.

So far, almost 2/3 of all Israelis have played along with the government’s restrictions and have been fully vaccinated, but now that a 3rd shot has been mandated, the people are coming together to protest en masse against the restrictive vaccine passports.

Videos that were posted online show thousands of people marching through the streets of Tel Aviv for their liberation from the oppressive Covid mandates:

It’s about time. Forcing these booster shots proves that the vaccine provided no immunity, it’s no wonder hospitals in Israel were experiencing 85-90% of new cases coming from vaccinated individuals.

Israeli citizens have been among the first to receive the rushed vaccine ever since it was made available. Now their government wants to use them as experimental guinea pigs for the even more hastily developed booster shot.

Well, they are standing up and saying enough is enough.

One of the local news outlets – Channel 20 Israel – covered the event and called the fed-up citizens “right-wing activists” as they marched for their freedom.

Full tweet translation: “Thousands of right-wing activists are now marching in Tel Aviv in protest against the Bennett government.”

These people aren’t crazed right-wingers at all, many of them have been fully vaccinated and followed all the mandates up until now. These people are just not buying the lies anymore – they demand their freedom back.

The tyrannical health regime cannot hide the fact that natural immunity serves as much better protection from the virus than the experimental vaccine – and with no dangerous side effects.

In fact, one recent study by a team of researchers at Tel Aviv University showed the vaccinated are 13x more likely to catch new variants of the virus and are even MORE LIKELY TO BE HOSPITALIZED than those who have natural immunity.

Thanks to the boosters, the worldwide resistance to the vaccines grows even stronger.