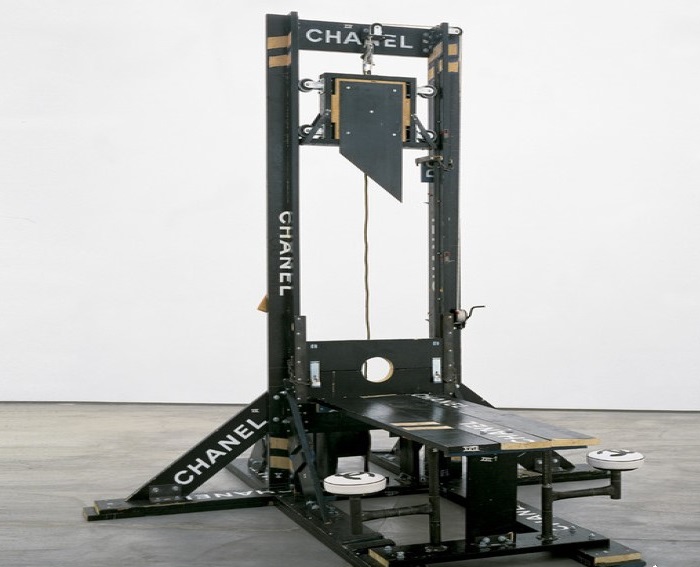 The technologically advanced guillotines, he said, are being manufactured in Beijing before being flown exclusively to US airbases. Then, the military distributes the guillotines to FEMA camps nationwide.

He said the smart guillotine project was commissioned in 2011, at the request of former president Barrack Hussein Obama, who had hoped during his term to declare martial law and use the deadly apparatus against patriots and freedom fighters that challenged his one-world government agenda. The guillotine, he added, is the ideal method of execution for instilling fear among the masses.

The guillotine gained popularity during the French Revolution. The device consists of a tall, upright frame in which a weighted and angled blade is raised to the top and suspended.

The condemned person is secured with stocks at the bottom of the frame, positioning the neck directly below the blade. The blade is then released, to quickly fall and forcefully decapitate the victim with a single, clean pass so that the head falls into a basket below. The smart guillotine retains the basic design while adding several scientific advancements.

For example, the headrest has motion sensors and pressure plates that detect the presence of a human neck. No operator is needed; a computer drops and retracts a razor-sharp weighted titanium blade, which, our source said, can sever several hundred heads per sharpening.

If a person resists, arm and leg restraints spring forth from recessed compartments, rendering the victim immobile. Moreover, the smart guillotines employ biometric scanning, including facial recognition technology to exonerate persons mistakenly placed on the guillotine for execution.

“The Deep State, and by association FEMA, recognized that some of its own people’s heads might accidentally wind up on the chopping block. They had to devise a way to stop the blade from lopping off friendly heads. So, when a person is face down waiting for the blade to fall, the computer scans the face and iris. If it matches a friendly face stored in a database, the blade won’t fall, and the person is set free,” our source said.

After Obama left office, FEMA and the Department of Homeland Security kept the smart guillotine project alive, using slush funds and black project money to fund three thousand of the villainous devices, each of which reportedly cost seventeen million dollars. FEMA ordered them from the Chinese, our source added, because the agency “felt guilty” about using Made-in-America products to execute Americans. In addition, the Chinese versions are less costly.

“FEMA’s main focus is on Texas. All eyes on Texas. If there’s going to be a public insurrection, they know the battle lines will be dawn in Texas. They know the patriot community is thick in Texas. That’s why Texas is receiving more of these smart guillotines than any other state. FEMA’s first strike will occur in Texas,” our source said.

The 500 units were sent to FEMA camps near Austin, a New World Order “shock training facility” in Waco, and a FEMA internment camp disguised as a water treatment facility in Carrolton.

“All states have them, but Texas got the majority right now,” our source said.

If all information is accurate, the Deep State, using FEMA as its agent of evil, is expediting plans to herd humans into internment camps. The acquisition of smart guillotines is a portent of the Deep State’s hatred of America, the American people, and of the document—the Constitution—our forefathers authored to protect us from the wicked machinations of the very government we elected into office.