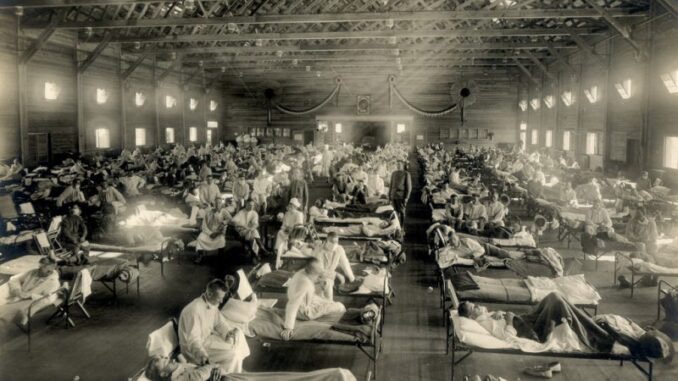 Did a Vaccine Experiment on U.S. Soldiers Cause the “Spanish Flu”? The 1918-19 bacterial vaccine experiment may have killed 50-100 million people.

The “Spanish Flu” killed an estimated 50-100 million people during a pandemic 1918-19. What if the story we have been told about this pandemic isn’t true? What if, instead, the killer infection was neither the flu nor Spanish in origin?

Newly analyzed documents reveal that the “Spanish Flu” may have been a military vaccine experiment gone awry.

In looking back on the 100th anniversary of the end of World War I, we need to delve deeper to solve this mystery.

Many people do not realize that disease killed far more soldiers on all sides than machine guns or mustard gas or anything else typically associated with WWI.

I have a personal connection to the Spanish Flu. Among those killed by disease in 1918-19 are members of both of my parents’ families.

On my father’s side, his grandmother Sadie Hoyt died from pneumonia in 1918. Sadie was a Chief Yeoman in the Navy. Her death left my grandmother Rosemary and her sister Anita to be raised by their aunt. Sadie’s sister Marian also joined the Navy. She died from “the influenza” in 1919.

On my mother’s side, two of her father’s sisters died in childhood. All of the family members who died lived in New York City.

I suspect many American families, and many families worldwide, were impacted in similar ways by the mysterious Spanish Flu.