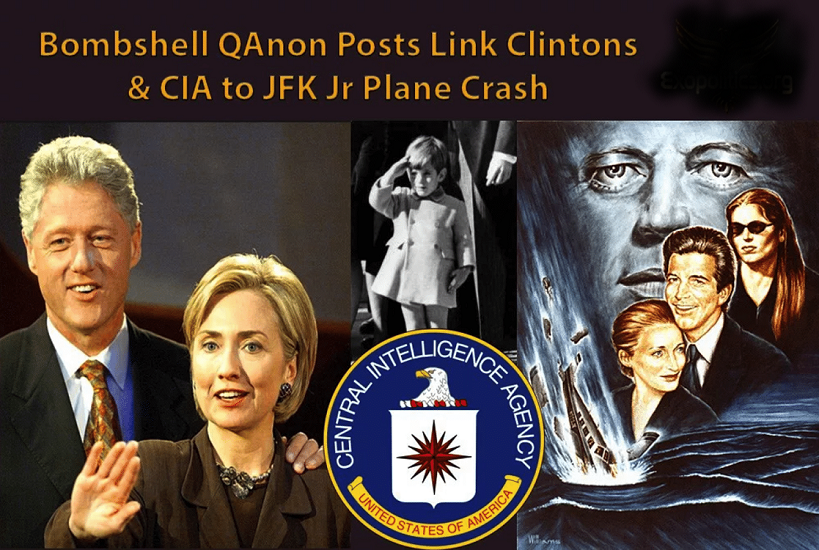 On April 8, QAnon posted two messages linking the Clintons and the CIA to the plane crash of John F. Kennedy Jr and how his death cleared the path for Hillary Clinton to start her political career by running unopposed by any major Democratic rival for the newly available US Senate seat for New York.

If the Clintons were involved in the death of JFK Jr it would be ironic since Bill Clinton sought to find out who killed President Kennedy just before his inauguration in January 1993, presumably to avoid a similar fate. The answers he received later helped Hillary Clinton launch her political career.

Furthermore, QAnon’s posts reveal the thinking of military intelligence officials about leading political figures such as the Clintons and agencies such as the CIA. We are now ready to closely examine what QAnon had to say about JFK Jr:

The first two lines of the post reveal that Donald Trump had a relationship with JFK Jr. This is not that surprising since there are photos showing Trump and Kennedy together at his exclusive Mar-a-Lago club on Feb 29, 1996.

The fact that they were probably friends is significant in that Trump would likely be highly motivated to have the truth come out about what really happened.

The next line in the post refers to the Kennedy’s plane crash on July 16, 1999, which killed him, his wife and sister-in-law. The crash happened soon after JFK Jr had told two friends that he was planning to run for the U.S. Senate seat that had become available after the retirement of Daniel Patrick Moynihan.

Only months before the crash, Hillary Clinton had declared her candidacy for the Senate seat, but was running into criticism for being a carpetbagger since she and Bill Clinton were not New York residents.

According to a New York Daily News story published on July 20, 1999, JFK, Jr., was secretly planning to run for the Senate seat despite Hillary having already declared her candidacy. Given a 1997 private poll showing that “John F. Kennedy Jr. was by far the state’s most popular Democrat.”, it’s highly likely that he would have succeeded.

Kennedy’s entry into the Senate seat race would have denied Hillary the start she was seeking to her political career just before Bill’s impending Presidential retirement.

QAnon was clearly linking the plane crash to the start of Hillary’s political career. While some may consider this to be mere coincidence, QAnon’s next post suggested something sinister had in fact happened.

The link was to a January 1956 document in the CIA’s reading room that discussed an Earth Satellite Program that was linked to Guided Missiles and CIA operations. CIA Director Allen Dulles was mentioned as a part of the program.

QAnon was implying that that JFK Jr’s plane crash was linked in some way to this or a similar advanced aerospace program, the CIA and Dulles. The Dulles connection is highly significant since there is much documentation linking him directly to the 1963 assassination of President John F. Kennedy.

More specifically, there is a Memorandum containing  a set of eight policy directives drafted by Dulles on behalf of a mysterious committee called Majestic 12 (MJ-12) in charge of advanced aerospace programs. One of the eight directives, Project Environment, gave cryptic authorization for the assassination of any public official that threatened Majestic 12 operations.

The text of the above Directive reads:

Draft – Directive Regarding Project Environment – When conditions become non-conducive for growth in our environment and Washington cannot be influenced any further, the weather is lacking any precipitation … it should be wet.

Dr Robert Wood, who is the foremost expert in analyzing MJ-12 documents using forensic methods, has concluded that the partially burned document is an assassination directive. In an interview discussing the burned document, he pointed out that the cryptic phrase “it should be wet” originates from Russia, where the phrase ‘wet works’ or “wet affairs” denotes someone who had been killed and is drenched with blood.

In the book, Kennedy’s Last Stand, I analyzed the testimonies, circumstances and documents supporting the conclusion that Dulles had arranged for the MJ-12 directives to be applied to the Kennedy administration in general, and to President Kennedy in particular.

The CIA’s Counter Intelligence chief, James Jesus Angleton, was given the authority to carry out the MJ-12 directives, as documented in a leaked November 12, 1963 Memorandum released only 10 days before Kennedy’s assassination.

The Top Secret Memorandum instructed the then Director of the CIA, John McCone, to share all classified UFO information with NASA, in order to fulfill its requirement as outlined in National Security Action Memorandum (NSAM) 271.

In short, the two memoranda Kennedy issued on November 12, 1963 would ensure that access to classified UFO files would be extended to more government agencies, ultimately resulting in direct Presidential access.

Such direct access had been denied to President Kennedy by McCone’s predecessor, Allen Dulles, who retired as CIA Director in November 1961, but likely continued on in his other position as head of the MJ-12 Committee as suggested in the eight MJ-12 Policy Directives.

It’s feasible that the MJ-12 Directives drafted by Dulles and approved by the MJ-12 Committee were used not only for the 1963 assassination of President Kennedy, but also for the removal of his son, 36 years later.

There have been many questions raised about Kennedy’s plane crash and whether or not it was simply due to his inexperience as a pilot, compounded by marital and financial problems, as suggested in an official report by the National Transportation Safety Board. Was the report a cover up for the plane being shot down or sabotaged in a targeted assassination conducted by the CIA? This is exactly what QAnon appears to be suggesting.

So why would the CIA want to help Hillary Clinton attain public office, and was this related in any way to Dulles’ mysterious MJ-12 Directives?

To get an answer, we can begin with the Clintons involvement in a CIA run drug operation out of Mena, Arkansas during Bill’s governorship. There have been multiple witnesses and documents showing how then Governor Clinton was protecting and facilitating the Mena CIA operation.

In late 2017, a movie based on real events was released showing how a former TWA airline pilot, Barry Seal, was recruited by the CIA to a covert operation out of Mena, Arkansas, which involved illegal arms and drug running, and how Governor Clinton protected the entire operation.

More damning is the testimony and documents supplied by Roger Morris, an investigative journalist, who exposed the full extent of Clinton’s involvement in the CIA drug running program, and Seal’s involvement.

In a book, interviews and documentary, Morris revealed how the thousands of documents and many witnesses in his investigation were never published by the mainstream media, or investigated by the FBI or the U.S. Congress.

The reason why Morris’ investigative efforts got nowhere is that the drug money was used by the CIA to finance MJ-12 operations secretly conducted throughout the US in the development of advanced aerospace programs. Many UFO sightings were in fact advanced aerospace vehicles that were part of secret space programs under development by the US Air Force and Navy, with the help of major aerospace corporations.

Having shown his usefulness in the CIA drug running operation at a state level, the MJ-12 group cleared the path for Clinton to become President so he could do the same at a national level.

Just before beginning his first term on January 20, 1993, President-Elect Clinton made a very strange request to close family friend and lawyer Webster Hubbell: “If I put you over there in justice I want you to find the answer to two questions for me: One, who killed JFK. And two, are there UFOs.” According to Hubbell, who described the incident in his memoirs, Friends in High Places, “Clinton was dead serious.”

Hubble said that he was unsuccessful in finding satisfactory answers. He was eventually forced to resign as Associate Attorney General due to the Whitewater political scandal and was jailed in July 1995 for 18 months.

The Clintons quickly learned, because of what had happened to Hubble, that the Deep State, through the CIA and mysterious policy groups like Majestic 12, had great power. Despite all his power as President, Clinton could not thwart the Deep State’s plans.

The Clintons decided to end their efforts to get answers to questions concerning JFK’s assassination and what lay behind the UFO phenomenon. This was despite them knowing that the CIA drug running operations was secretly funding highly classified aerospace programs.

By the end of Bill’s Presidency, the CIA’s “unofficial” black budget was estimated to be as much as one trillion dollars annually, which was more than double the Pentagon’s budget at the time.

Secret deals were subsequently struck and the CIA/MJ-12 (aka Deep State) supported Hillary’s rise to political power, and the New York Senate Seat was planned to be her launching pad for high political office.

Consequently, when JFK Jr was on the verge of publicly declaring that he was going to run for the Senate seat, not only did he threaten Hillary’s nascent political career, but he also threatened the carefully crafted plans for future CIA funding of MJ-12 operations. Consequently, the same or a similar policy directive to Project Environment, which had been used to assassinate President Kennedy, could now be used against JFK Jr for his threat to MJ-12 operations.

QAnon’s posts linking JFK Jr’s 1999 plane crash with Hillary Clinton and the CIA are certainly a bombshell. Close examination of the history of the Clintons and CIA secret Deep State actors such as MJ-12 provides a powerful rationale for why JFK Jr was perceived as a threat, and assassinated in a plane crash made to look like an accident.

…because if it were up to me…nobody would go to GITMO.

Instead I would hang every stinking one of the cabal scumbag slime balls on the White House lawn on a rope for all to see. And leave them there to rot and set an example to others. Until the buzzards pick their bones.