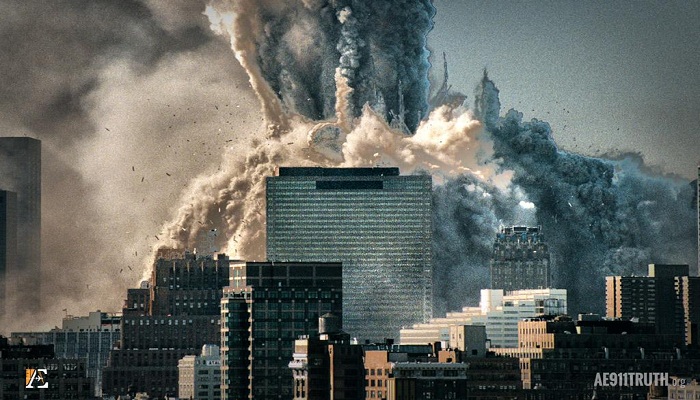 Matt Agorist has the story.

In a story that should be on the front page of every newspaper, or at least have any reporter worth their salt digging into it, a man who purports to be a controlled demolitions special operative for the United States, has come forward with a damning confession. According to Manuel Garcia Jr., he was tasked by a team created by Dick Cheney to help carry out a false flag attack on the World Trade Centers, otherwise known as 9/11, in order to “reshape the World Order to secure another century of US control.”

According to Garcia, he’s kept this secret for the last 20 years and has only recently decided to come clean after being diagnosed with a terminal illness. In his confession, Garcia paints a behind the scenes picture of the deep state at work to maintain their control through fear, destruction, and mass murder.

Garcia, who holds a “Physics Ph.D. from an Ivy League University” says in his confession that his career began with the government working on a Top Secret program called the Orbiting Space Laser Weapons Platform (OSLWP) project. According to Garcia, this program made the government’s work at HARP look like child’s play.

After his work was done to allegedly construct a space laser weapons platform, he was approached by a former security guard he referred to as ‘Keith’ who was working under Dick Cheney’s direction to carry out a false flag attack on the twin towers and tower 7. In his confession, Garcia explains:

Deep State rules. ‘Keith’ had been tasked to bring me a very tasty offer for getting back into the Deep State fast action high tech world I had been so enthralled by. The project was being run by Dick Cheney, and its purpose was to reshape the World Order to secure another century of US control. How could I say no?, plus, the pay was astronomical (and thanks to the US taxpayers!).

And that is how I was recruited into the most complex US false flag operation in history: the secret controlled demolition of the World Trade Center: a cover for launching the Global War On Terror, which is really the War For Complete National Control and World Domination, though of course they never call it that or let any of that phraseology appear in any written memo or in any electronic file. Those of us who already had long histories of working deeply in dark government programs all knew the drill about “security.”

The event and operation was referred to as GWOT911 and those participating in it thought they were serving the best interests of the country. According to Garcia, the false flag attack was supposed to take place on a weekend when the buildings were empty. But, as the 2,996 victims and their families know, they were far from empty.

Thinking they were doing the work of patriots, Garcia and his team got to work on planting explosives.

When it came time to select Emplacement Teams (ETs), I was selected as the “physics lead” for Team 6, and I got Keith’ as the “muscle” leader for my team. My small platoon comprised of 20 people; the other 18 were a mix of demolition emplacement techs, electronics and circuitry interruption specialists, and security troopers like ‘Keith’. This was exciting adrenaline-pumping work.

In less than two weeks, staged as HVAC, plumbing, elevator, and electrical conduit repairmen working through the Labor Day weekend of 2001, all our teams got the WTC Twin Towers and Building 7 wired for demolition. Then we were sent home and scattered, without knowing the date of execution or even if the operation would actually be carried out.

On September 11, exactly 20 years ago today, two airplanes were flown into the twin towers and America and the rest of the world was changed forever. Garcia explained that the world got a “miraculously instant engineering and physics education that day” as they watched three buildings collapse into their own footprints at free fall speed from fire for the first time in history.

Because so many people questioned what they saw on television that day, it was after 9/11 that yet another conspiracy unfolded as well. According to Garcia, he was reportedly tapped to carry out a massive disinformation campaign to shut down all the folks who called out the flaws in the government’s official story.

The GWOT911 Directorate realized that they needed to ramp up and maintain a long-term undercover disinformation program to confuse the public and keep a lid on the real purpose of the 911 ‘Spectacle’ (that’s what we GWOT911 insiders call the events known to the public as “September 11”: “the Spectacle”), and ‘Keith’ had been sent to retrieve me for induction into that effort. I got a really nice seafood dinner in San Francisco that night — and of course martinis before dinner, and 18-year scotch after — for listening to that spiel and getting read into the program. Hey, more big chunks of change electronically dumped into my bank account for the next seven years of easy work. My cover was “retired physicist” (for the nuclear bomb work) who wrote amateur essays supporting the “official story” of the 911 events as being solely the work of Osama Bin Laden and his 19 Saudi henchmen (who were all expendables supplied to GWOT911, through Cheney, as part of the ‘Washington-Allied Oil Industry’s’ compliance with the plan).

Garcia’s “cover” checks out as he’s been writing for well over a decade since, “debunking” 9/11 “myths” as a “retired physicist” for Counterpunch. Despite his best intentions to counter the “truthers,” according to Garcia, they were relentless.

So I was recruited to become one of many “internet influencers” tasked with thwarting the messaging that had started coming out of what soon became known as the ‘truther community.’ For me this was easy work at first, but it soon became boring. Like gravity, the truthers just never quit. It became clear to me that truther belief would live forever, and it was ultimately a waste of my time to continue opposing it. But the income from doing it was good, so I slogged on without any enthusiasm.

Between 2002 and 2008 many big engineering reports were issued detailing the technicalities of the official story, and a huge number of photographs were published of scattered airliner debris in Pennsylvania and at the Pentagon.

In 2008, Garcia’s paid role as an agent of disinformation finally came to an end and he was cut loose to retire with a fat bank account, filled with taxpayer dollars — made with the blood of innocent Americans.

For the last 13 years, Garcia kept quiet and continued to write for Counterpunch until he received a medical diagnosis that changed his mind.

Then this year I got a medical diagnosis, and my long view into the future collapsed (another controlled demolition) into a much shorter timeline. I’m not a praying kind of guy, I like to think of myself as a realist who is logical — and moral. So I came to the conviction to “spill the beans.” Why not, what can they do to me now? And who cares anyway? Nobody pays attention, nobody notices anything, nobody listens to anybody, and everyone is their own expert who does their own research: usually on the toilet with a smartphone.

Garcia says that even though he came clean, no one would even notice, and he is right. We couldn’t find a single source that even tried to debunk his claims.

So that’s my story. You can believe it or not as you like, I don’t care. I’m at peace for having told it, in fact I rather enjoyed myself doing so.

The Free Thought Project spoke to Garcia through email in an attempt to get him on our podcast but he told us that he “can’t add anything to it by talking. In any case people interpret as they wish, and I’m happy to let them do that without my interfering.”

While this story may seem far-fetched to many, Garcia’s claims of explosives used to take down the towers are backed up by hundreds of scientists, engineers, and fire fighters. As TFTP reported, a study was published last year, which came to the exact same conclusion and the family of a British victim just served the government with 3,000 pages of supporting evidence.

Will you be one of the folks Garcia mentions above who won’t notice or care or pay attention? Or, will use critically think about his words and examine the possibilities of it being true? The choice is yours.