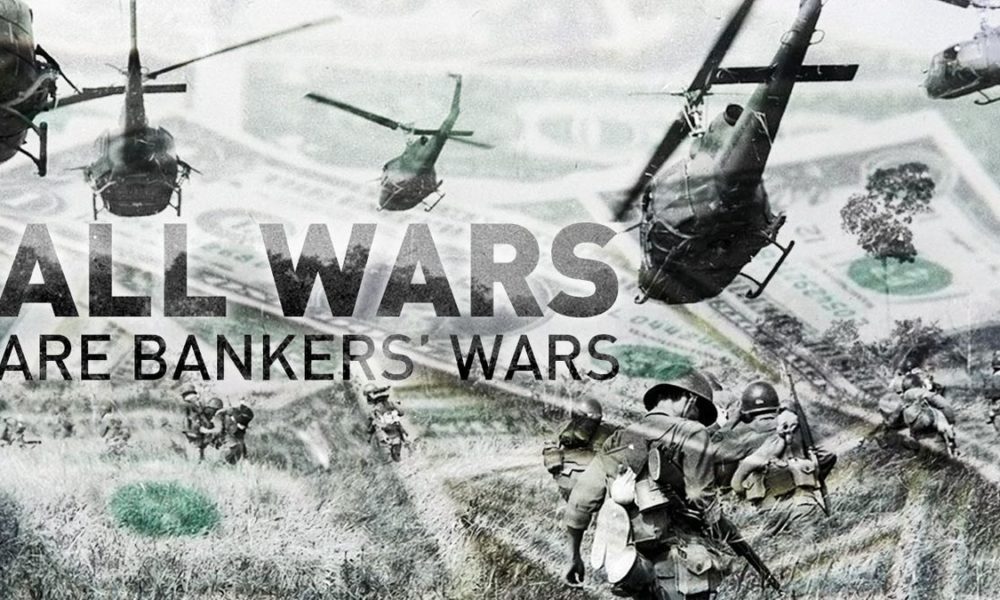 I have been warning about an inevitable East vs. West economic war for many years now.

When would the most convenient time be for World War III?

The issue of “convenience” might sound odd, but I want readers to remember one rule: All wars are banker wars.

There is nothing you cannot eventually understand in terms of geopolitics as long as you accept the fact that international conflicts are generally engineered and always designed to benefit a particular group of establishment power brokers and financial elites.

If you are one of those people who assume all of these events are merely “random and unfortunate coincidence” then you’ll remain in the dark for the rest of your life – and will never grasp why terrible things are happening to you as the world falls apart.

You will go to an early grave because you were unprepared while still thinking you were the smartest person in the room.

The reality is, Russia has long been attached to globalist interests and this is not going to change because of the war in Ukraine, just as it did not change after Russia annexed Crimea.

China is, of course, even worse when it comes to collusion with globalist institutions. The nation accrued trillions of dollars in debt because this is a prerequisite for joining the IMF’s Special Drawing Rights (SDR) basket of currencies.

Yes, China went from being a nation of minimal debt to being trillions in the red just because the IMF demands “liquidity” for a nation’s currency to be considered viable for their global centralization initiative. This is not the behavior of a country that is anti-globalist.

I’m not going to continue rehashing the facts surrounding eastern nations and their attachments to the globalists here. I’ve already done that.

If there’s a major war, then there are globalists behind it influencing both sides and seeking to gain more power. If you haven’t figured this out by now, then you never will.

Here’s what war is good for

Why engineer a war? Simple – when you play both sides of a chess game, you always end up the winner. Beyond that, chaos is the ultimate recipe for advancing draconian agendas that the public would never allow to pass during peacetime.

What I want to examine here instead is the issue of timing and development; how is this massive economic war going to play out and how long will it take to happen? Once we understand the stages, maybe we can brace for impact and take actions to change the outcome.

The first step is to acknowledge that the ball is in the court of eastern nations and that their actions will dictate the pace of events.

The economic lesson the West has forgotten

True wealth has nothing to do with money or debt creation; true wealth comes from resources, the means of production and labor. This is something the Marxists actually got right in their philosophy; the problem is that Marxists are only interested in ways to steal labor, resources and production while making the public think that such theft is a good thing.

Eastern nations continue to understand what real wealth is. You can have all the money in the world but if you have no manufacturing base or resource development then you have nothing.

It’s as simple as that.

If a nation has no real wealth and no means of creating it, no printing press is going to save its economy.

The West has abandoned much of its means of production and has crippled the exploration of its own resources through fake environmental concerns like “carbon pollution.” The East has not done this, at least not in a way that affects long term productivity. Therefore, the East is in the strongest position to survive a global economic conflict.

But the real key to the progression of an economic world war is the combination of countries involved and their trade agreements.

Russia and China, for example, have been developing bilateral trade meant to cut out the U.S. dollar for many years now. Russia is resource-rich, and China has the world’s largest manufacturing and export base. An alliance makes perfect economic sense. And this is exactly what has happened.

Only weeks before the invasion of Ukraine, Russia signed a 30-year oil and gas contract with China worth hundreds of billions of dollars. This deal coincides with the construction of a major pipeline from Russia to China which will be completed by 2025.

India also made arrangements for increased oil shipments from Russia, and will pay without the dollar (formerly the world’s sole petro-currency). Furthermore, the promise of lower prices while the rest of the oil world is experiencing rapid inflation in energy prices is highly tempting for those purchasing oil, natural gas or coal from Russia.

The other nations of the BRICS bloc (Brazil, India, China and South Africa) have all been highly active in trade with Russia despite western sanctions and the removal of Russian banks from the SWIFT international payments network.

But how does this trading bloc affect the time frame of the world war?

An economic war has economic targets

It has been my belief that the real target of this war is not Russia or China, but the U.S. dollar and the American economy. Yes, there will be far reaching financial consequences beyond the U.S., but our economy is the only economy that is completely reliant on our currency’s global reserve status.

A world war using economic weapons and tactics is the worst type of war we could fightbecause it is not a war we can win. The dollar’s global reserve status is our Achilles heel. It is not a strength, but a weakness.

While all eyes are on the shooting war in Ukraine on the other side of the planet, very few realize that the worst damage is going to hit us right here at home.

The sanctions on Russia are only a part of the problem, as this is creating momentum towards a general decoupling from the dollar trade. The bigger issue is the BRICS nations (and their export/import partners) who will refuse to accept sanctions because they are economically dependent on each other.

One example is the recent announcement by Hungary that they plan to refuse any cuts to Russian oil and gas imports. Why? Because this would cause an energy crisis in their country, one they couldn’t recover from.

Many other nations are following this logic around the world, and if NATO is going to continue pushing for economic isolation of Russia, then those countries will invariably stop using the dollar as their reserve currency.

Why “invariably,” you might ask – why does Russia’s economic isolation lead to the end of the dollar’s global reserve status? Here’s why: when the Biden administration and the European Union (EU) sanctioned Russia, they also froze Russia’s U.S. dollar accounts and terminated Russia’s connection with the international payments platform. This was a very clear method of coercion! It’s as though Biden called up Putin and told him, “Get out of Ukraine or else. That’s a real nice economy you got there. Be a shame if something, ah, happened to it…”

The rest of the world watched the West financially cancel Russia with a mix of awe and horror. This act of economic warfare revealed a nearly-unthinkable conclusion: If they did it to Russia, they could do it to us, too…

…wars tend to turn into major junctures for global currencies, and with Russia losing access to its foreign currency reserves, a message has been sent to all countries that they can’t count on these money stashes to actually be theirs in the event of tension. As such, it may make less and less sense for global reserve managers to hold dollars for safety, given that they could be taken away right when they’re most needed.

We have eight years to prepare

The year 2030 is consistently mentioned by the United Nations, the IMF, the WEF and the rest of the cabal of globalist institutions as the final milestone for their Great Reset agenda.

If a global economic crisis is the catalyst as it appears to be, then several years would be required to let the collapse play out – along with the introduction of a “solution” to the problem. This means that the economic war will have to accelerate quickly going into the next year.

Today we are already seeing 40 year highs in inflation, along with considerable supply chain disruptions. Multiple globalist foundations are “predicting” food shortages around the world in the next 3-6 months. I believe the war itself will expand rapidly within a year to include China, and most of the damage will be done by the end of 2024. This will all depend on how fast exporters (mainly China) dump the dollar; the dollar dump will be the primary trigger.

A significant part of the WEF’s Great Reset agenda and the IMF’s Special Drawing Rights global digital currency initiative would require the end of the dollar as the world’s reserve currency.

This is a process the globalists have been talking about openly for some time. It’s not “conspiracy theory,” it is conspiracy reality. The IMF has argued on many occasions that the global currency framework must be “managed” by a centralized entity that can prevent national governments from exploiting currency trade for their own ends, and this includes digital currencies.

The stage is already set for this narrative. The U.S. will be painted as an example of why nationalism is a “path to disaster” and why no single nation should be trusted with so much power in the form of a world reserve currency. That kind of power tempts governments not onlyinto excessive money creation power debt-financed spending sprees. Not only to print new money to pay for those old debts, thus debasing and degrading the dollar’s purchasing power worldwide (also known as inflation). But look at what the U.S. did to Russia – freezing bank accounts and canceling credit cards of the world’s 10th largest economy. The globalists would call this an abuse of power.

Throughout history, global reserve currencies have risen and fallen. From the Greek drachma in the 5th century B.C. to the British pound sterling (1700-1931), every single one has collapsed. And the resulting implosion of a reserve currency spreads like a tsunami, wrecking economies worldwide.

Thus, it is only “logical” that a global central authority with no national loyalties be put in control of an “international” reserve currency, right? Maybe a multi-currency-based basket system, or, perhaps, a single world currency… To prevent any future tragedies and abuses of power from ever happening again. Right?