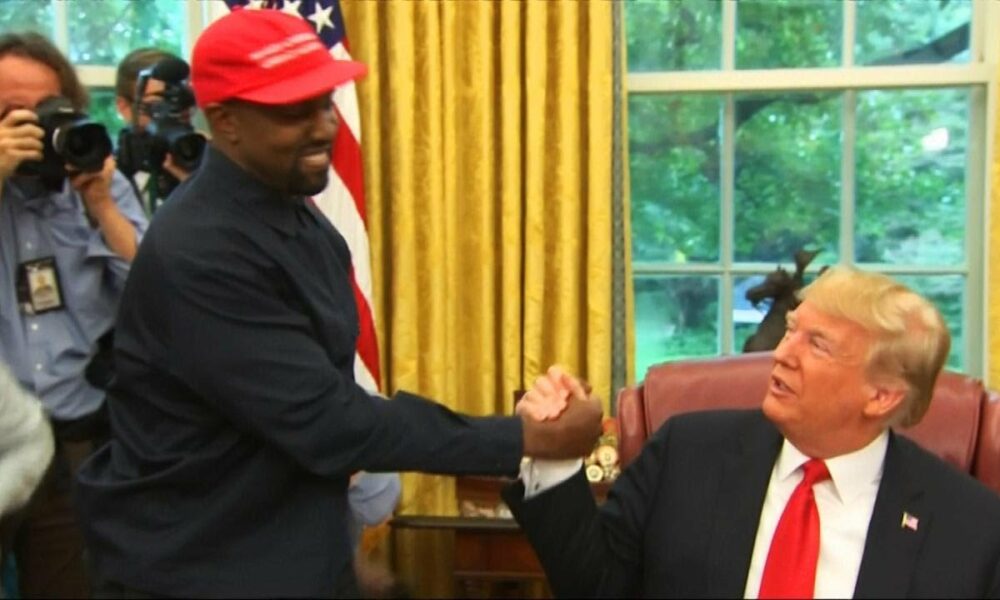 Aides of Florida Governor Ron DeSantis are urging him to deliver a decisive, merciless blow upon Donald J. Trump for imprudently hosting a banquet for two controversial, polarizing figures currently basking in media limelight—Ye, formerly known as Kanye West, and Nick Fuentes, a 24-year-old kid accused of spouting antisemitic and misogynistic comments on his livestream broadcasts.

Trump, as the story goes, invited Ye to dinner at Mar-a-Lago Tuesday evening because the latter was eager to see Trump’s Florida estate, and Fuentes tagged along as Ye’s uninvited guest. According to a video Ye later posted to Twitter, he had asked Trump to be his running mate in the 2024 presidential election, a suggestion that provoked some not-so-nice remarks from President Trump, who pushed back on Truth Social hours after Breitbart reported on the dinner.

Trump posted Ye had come to him for business advice, adding he had no idea who Fuentes was prior to the Tuesday meal.

Elsewhere in Florida, Ron DeSantis’ was getting an earful of guidance from staff members recommending that he at once make Trump’s dinner a national issue, and that he denounces Trump as “reckless” and “unpresidential.” Communications Director Taryn Fenske advised DeSantis to call out Trump’s “Dinner for Shmucks,” a reference to a 2010 comedy film.

“Trump invited a Hispanic white supremacist and a Black antisemite to dinner. Don’t sit on this, Governor. Trump saying he didn’t know about Fuentes is absurd. He’s also said he didn’t know who Julian Assange was—after quoting and quoting WikiLeaks dozens of times in 2016. He knew exactly who he was dealing with, and Trump met them for a reason. We shouldn’t believe Fuentes just showed up uninvited out of the blue. Mar-a-Lago doesn’t work like that—guests are RSVP and background checked,” Fenske told DeSantis, according to a source in Gov. DeSantis’ office.

“Governor DeSantis, we’re talking about Trump dining with a holocaust denier who says women shouldn’t have the right to vote. Fuentes is vile. If Trump’s allying with people like him and Kanye, you must take this news center stage,” Redfern said. “These pernicious malcontents aren’t true MAGA—they’re emerging icons of hatred.”

Redfern went on to say that Ye and Fuentes look to normalize racism and make it part of mainstream conservative political ideology.

However, the governor’s chief-of-staff, James Uthmeier, had a different take on Trump’s feast: Ye and Fuentes set Trump up.

Trump, Uthmeier explained, has a historical propensity for embracing yes-men, fawners, and constituents who effusively sing him praise. Both Ye and Fuentes fit the bill. Uthmeier argued that Trump, ever a gracious host, probably believed Ye just wanted to sneak a peek at Trump’s lavish 62,500-square-foot mansion and had no clue Fuentes, an “agent provocateur,” was along for the ride.

“Maybe Trump’s clueless about Fuentes. He certainly wasn’t going to turn away Kanye’s guest either way,” Uthmeier told DeSantis. “This has setup written all over it. Kanye wants to be president. Fuentes is part of his campaign. They want to undermine Trump. So, they knew Fuentes would bring bad press, and leaked the entire thing hoping the media would run with it.”

Gov. DeSantis chose valor over vindictiveness, saying he would “sit this one out to see what happens” rather than meddle in Trump’s personal affairs.

None of RRN’s three Mar-a-Lago sources were present Tuesday night, so we can’t make an official comment on Trump’s reaction.

We reached out to Trump spokesperson Liz Harrington, who said, “We’ve said all we have to say on the issue.”