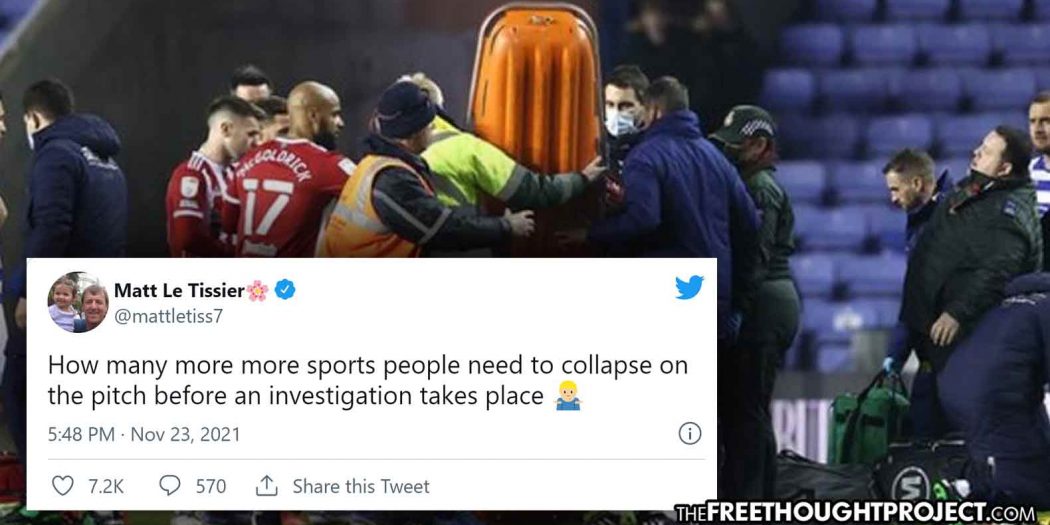 It is not unprecedented. Throughout history there have been sports players who suffered from multiple conditions who have “collapsed” on the field during practice and during live games. However, a recent article from the German newspaper, Berliner Zeitung has highlighted an “unusually large” increase in the number of these collapses recently, leading to much speculation. The Free Thought Project looked in to how frequently players used to collapse or die during games. There are in fact several recorded collapses every year and even deaths. Doctors and experts usually attribute these to underlying conditions which have not been previously diagnosed. However, as Berliner Zeitung points out, the number of players who have collapsed in 2021 appears to be much higher than previous years.

In fact, if we look back over the last hundred years, 2021 appears to be the deadliest year on record for football players dying during gameplay. So far this year, 14 association footballers alone have died during gameplay. This is the highest amount of deaths by far, according to the chart listed here on Wikipedia.

While this number is high, when we zoom out and look at the list compiled by the German paper, these instances appear to be unusually large.

As Berliner Zeitung points out, emergency situations have come up again and again in the last few weeks and months:

Exactly what is causing this increase in deaths and sudden collapses is unknown.

According to research by Dr. Yaffa Shir-Raz, there has been a “5-fold increase in sudden cardiac deaths of FIFA players in 2021.”

The numbers are startling and yet no one appears to be looking into what’s causing it. As no one looks into the reported increases in collapses and deaths, this week, yet another healthy young footballer collapsed during a game. Sheffield United midfielder John Fleck collapsed with no one around him during their game against Reading.

“I didn’t see exactly what happened,” Blades boss Slavisa Jokanovic told BBC Radio Sheffield. “One moment he fell down. It was a really complicated situation.”

The game was subsequently stopped for 10 minutes as paramedics rendered live-saving aid to Fleck on the field.

“He is conscious in hospital and he asked for the result. We hope everything will be OK with him.

“It’s not easy for the players to focus on the moment after. Fortunately, the team is fighting well and we weren’t scared of our weaknesses. We were fighting for the three points.”

“It’s horrible whenever something like that happens on the pitch,” goalscorer Bogle told BBC Radio Sheffield. “The main thing tonight is that he’s OK and that he’s stable.

“It happens so quickly. You don’t expect it, you expect to play a normal football match. You don’t really think about those things going into games.”

Indeed, it seems rather odd that this isn’t being reported on by more news outlets or being looked into by the respective health departments in these different countries.