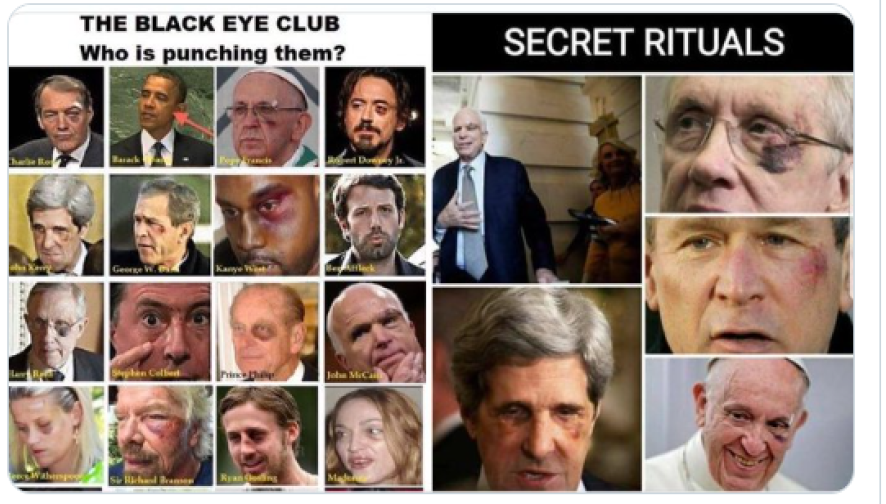 Although not officially an organization, the “Black Eye” club refers to a growing number of politicians, celebrities, business elites, and heads of State who have suddenly and mysteriously wound up with black eyes. Although a few of them have sustained injuries to their right eye, the majority occur on the left. Among those who have succumbed to this affliction are George Bush, Kanye West, and the Pope.

But why this current and periodic rash of Black Eyes?And why has this phenomenon disproportionately afflicted people of considerable power and influence?It would appear that there are two main categories within the “Black Eye” Club. Those seated firmly into positions of government/politics and those in the entertainment/Hollywood. Are there others in the fields of science, and military? I’m sure there are.Theories as to this strange phenomenon are abuzz on the internet and range from a secret society ritual which involves striking the participant in the head, to alien abduction and “Soul Scalping” in order to replace our world leaders with alien consciousness.Another theory holds that it is a form of punishment used to as a sort of check and balance within secret societies. And still, other theories lean towards the implementation of life extension technologies or preparatory surgeries for off-world travel.

A less extreme theory holds that the phenomenon is nothing more than the entertainment industry capitalizing on the public’s recent enlightenment of the existence of the Illuminati. But let’s assume for a moment this is only media marketing.

This would mean that the entertainment industry is using occult rituals to manipulate people into certain behavior and consciousness. The end result is the same. And the fact that most every successful pop and rap artists use Illuminati symbology in their act openly telegraphs the ritual.People can pretend like it’s a game, but if you’re acting out a ritual you are very much indeed participating in a ritual. A ritual that permeates the hierarchical tiers of the entertainment industry and obviously defines success.